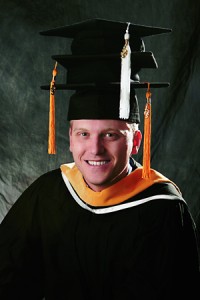 In five years Jacob Durrant earned bachelor’s degrees in mathematics and Portuguese and a master’s degree in biology. Photo by Jaren Wilkey.

Jacob Durrant (BS ’05) is a “numbers guy,” and not just because he recently graduated with a bachelor’s degree in mathematics. Add to that a second degree in Portuguese and a master’s in physiology and developmental biology. Divide by five years, multiply by a 4.0 grade point average, and subtract time for service.

That equals one remarkable student.

After serving a mission to Brazil in 2001 for the Church of Jesus Christ, Durrant returned there to help doctors in poverty-stricken areas. His volunteer work shaped his desire to further serve the world. “I hope that by combining my Portuguese and scientific backgrounds with future medical training, I’ll be able to serve internationally,” he says. Durrant is deciding where to begin a joint medical and doctoral program in the fall.The whiz-kid’s achievements aren’t solely due to his intelligence, says Daniel J. Fairbanks (BS ’82), a professor of plant and animal sciences and one of Durrant’s mentors. He recalls Durrant’s desire to take an upper-level genetics course without first fulfilling the required prerequisites.“I discouraged him, but Jacob insisted he wanted to do it, and he was the top student in the class,” Fairbanks says. “That’s just how he is.”Durrant says that what he’s gained from mentored learning has been as important as his classwork. “BYU mentoring experiences have taught me a lot about how to be a scientist, and I hope medical school will complete that training.”Even with his rigorous courses of study, Durrant has tried his best to remain focused on the world outside the classroom. “It’s important to maintain a larger perspective while focusing on the narrower goal of education,” says Durrant, an accomplished musician who was a finalist in BYU’s competitive polka competition.“I lost to a guy who was brave enough to wear lederhosen,” he says.Durrant’s experiences have prepared him to make a real-world impact on the medical community, says Fairbanks.“I know that one person can’t change the world,” says Durrant, “but if he can make a difference in the lives of just a few, that’s worthwhile.”

In 1999 as in previous years, significant numbers of Cougar scholars garnered national awards.