A Phantom in the HFAC

BYU became one of the first universities to bring the famed musical—with all its melody, masks, and melodrama—to the stage.

Bringing down the house gained a whole new meaning winter semester in the de Jong Concert Hall. Night after night, a special-ordered chandelier plummeted to the stage, round lights flashing and the sound of shattering crystal ringing in the BYU production of The Phantom of the Opera—Broadway’s longest-running musical.

When the rights to perform Andrew Lloyd Webber’s full-length production became available for universities in 2010, producer Jeffrey Q. Martin (BA ’00) wanted BYU to be among the first. “We really like to make a splash,” says Martin of the big musical BYU puts on every two years. This one, however, would be the biggest—in budget and collaboration within the College of Fine Arts and Communications.

Still, they didn’t have Broadway’s resources, “so a number of the bells and whistles we really had to come up with in a different way,” says director and theatre professor Tim Threlfall. In lieu of a trap door, the crew decided to make the Phantom fly and employed projection screens and strobe lights to create certain effects.

Preparation for the show took sound designer Douglas K. Olsen (BA ’13) to New York on a grant to study Phantom’s sound design on Broadway. “Artistically speaking, the Phantom is in control of this whole world,” Olsen says. “It’s his theatre, and it’s his music.” Through speaker and microphone placement and sound effects, Olsen allowed the Phantom complete control over the de Jong. 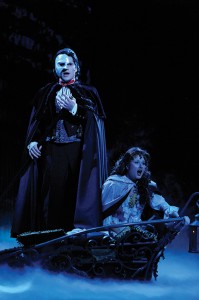 The cast and crew studied the book, musicals, and films meticulously. Makeup designer Janell R. Turley (’13) even studied different diseases and disfigurements to create an authentic interpretation of the Phantom’s yellow, parchment-like face. “This was the first time we had an entire makeup class at BYU devoted to doing the makeup for one show,” says Turley. Three teams created 240 costumes, including the Phantom’s winged masquerade costume, created from fiberglass kite rods, foam, papier-mâché, and vacuform plastic.

The performers consulted with part-time faculty member Dallyn Vail Bayles (BA ’04), who performed as the
understudy to the Phantom and Raoul in The Phantom’s third national tour. The depth of the Phantom character attracted Preston K. Yates (’16), who transferred to BYU in time to play the man in the mask. (He also got engaged on stage opening night.) “Not being loved and being hated—I have sympathy for him,” says Yates of the Phantom. “The main goal with me was to make . . . people sympathize with him.”

The two-plus years of preparation paid off—the show broke BYU ticket office records for first-day sales, selling almost 6,000 tickets in a few hours. It is BYU’s only theatre production to sell out completely before the beginning of performances—17 in all, the longest run for a musical in the de Jong Concert Hall.

As for the chandelier, it’s gone, with no signs of broken crystal anywhere. But don’t be surprised if the Phantom remains in the HFAC.

The show must go on: performing arts at BYU responded to COVID-19 restrictions with face masks and online performances.

All the Queen’s Men