Who here has ever had a crush on someone?” I asked the sea of 12-year-old faces at Cordova Middle School in El Paso, Texas. Dozens of hands shot up. “If you were in love with someone, what is the worst thing that could possibly happen?”

“They could find out?” guessed a girl, one of about 150 students in the crowd.

My task was to educate junior high students about the rich theatrical culture of the Spanish Golden Age, or the Siglo de Oro. Our group of 27 students and two professors from BYU had traveled to Texas to attend the Siglo de Oro Drama Festival. Each night we attended one of several Golden Age plays presented by professional companies from all over the world. By day we visited local schools to increase interest in this unique celebration of Spanish culture.

“Well, yes,” I responded. “That could be a problem. Or, what if that favorite person liked someone else?” I could almost see the mental gears shifting. “People weren’t so different 500 years ago. During the Siglo de Oro in Spain, people wrote plays about love, friendship, religion, and politics.”

I continued by introducing the scene our group was about to perform from Don Gil de las calzas verdes, a 16th-century comedia by Tirso de Molina. In our production the leading lady disguises herself as a man to woo the woman for whom she has been scorned. Although the primarily Latino students had all heard of Shakespeare, none recognized the names of equally prolific Spanish playwrights like Lope de Vega, Calderón de la Barca, or Tirso de Molina. 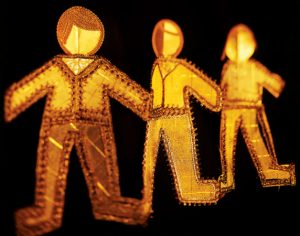 I learned the value of mentoring from two perspectives. As renowned scholars reached out to pull me up, I extended my hand to lift others.

The students soaked up our presentation and eagerly volunteered to become damas and galanes (ladies and gentlemen) for their own comedia. With help from the BYU actors, the volunteers staged a five-minute play, finishing with curtsies and bows for their cheering peers.

When we left Provo, we had been only students. But standing before these youth, we were also teachers.

During our trip, we exchanged these roles frequently. Although many of us were still undergraduates, our BYU professor gave us the opportunity to mix with some of the freshest minds in the Association for Hispanic Classical Theater. We attended the Spanish Golden Age Theater Symposium. We researched and wrote papers on Spanish theater. We participated in roundtable discussions with actors and directors following each play. During one comedia I sat next to the festival moderator, a theater producer from Mexico City, and listened as he revealed to me subtle nuances in the play and lifted me to a new level of learning.

One night I had the good fortune to sit across from Barbara Mujica, professor of Spanish literature at Georgetown University, as our group dined in a festive Italian restaurant. Her eyes were bright, and her voice rose with intensity over the surrounding din as she taught us the power of Spanish theater.

She told of watching a production of Portuguese playwright Gil Vicente’s Auto da barca da gloria years earlier. In the one-act play, Death and the Devil seek out the most influential, wealthy, and pious victims. The condemned argue for their salvation but are judged lacking and sentenced to destruction. “Just as they are about to set sail for Hell, Christ appears,” Mujica recounted. “Without saying a word, he gets into the boat, mounts the mast, and stretches out his arms, forming the image of the crucifixion,” powerfully ending the play with this image of forgiveness and redemption.

Over the candles and checkered tablecloth, Mujica explained how this singular performance had changed her life. Although she is not religious, she told us, “I went home and repented of all my sins.” Mujica has since dedicated her life to teaching students about the power of Hispanic literature and theater. That night she became a mentor and teacher to me.

During the festival I learned the value of mentoring from two perspectives. As Mujica and other renowned scholars reached out to pull me up, I extended my hand to lift local junior high students. In this chain of mentoring, we strengthened each other in both directions.

A BYU Spanish professor once told me that to learn another language is to live another life. The same may be said of our experience at the festival. We led two lives—one as students, another as mentors.

Following a two-hour weather delay, the BYU football squad matched the fireworks in the sky with footwork on the field.

Students Find Past Under Pavement

Since 1981 the OPA has given students opportunities to participate in archaeological digs throughout Utah.