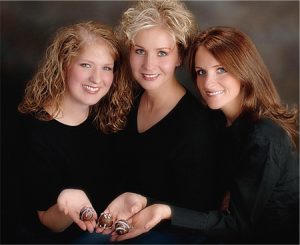 The Luthy sisters – Annette, Melanie, and Michelle – have shared their passion for chocolate with thousands through the Utah Chocolate show.

The indoctrination came early in the lives of the Luthy sisters: if it’s not chocolate, it’s not dessert. And judging by the swarms of people flooding their annual pre-holiday Utah Chocolate Show at the South Towne Expo Center in Sandy, Utah, the sisters’ theory appears to be palatable to many others.

Their mother, Anne-Maj Luthy (BS ’95), born and raised in Finland, taught them the value of “real chocolate,” so it is little wonder Melanie Luthy Henderson (’93), Annette Luthy Lyon (BA ’95), and Michelle Luthy Stevenett (BA ’04) have a passion for the brown elixir. “Mom knew the good stuff,” Melanie says.

The Utah Chocolate Show, with fifth-year plans under way, offers loyal and first-time attendees free samples, professional demonstrations, chocolate recipes, and what has been called the best chocolate shopping in Utah. The 2007 show featured a chocolate wedding cake contest and a “Utah Loves Chocolate” photography contest, and participants were able to register for a number of hands-on specialty classes taught by some of Utah’s most acclaimed pastry chefs.

The oldest of the Luthy sisters, Melanie has always enjoyed planning events, including her younger sisters’ birthday parties. More recently, she ran her own catering business in Arizona. When her family moved to Utah, Melanie had thought she’d take it easy for a while. But on the drive north she began toying with the idea of producing a show.

“I asked myself, ‘What would be the best possible event to produce?’ The answer was easy. ‘A show about chocolate, of course.’ It’s probably the most universal treat in the world.”

“When Melanie arrived in Provo,” Annette explains, “she gathered Michelle and me around our parents’ kitchen counter and spilled her vision of what the chocolate show could become.” From there the dream began to unfold.

Annette, a successful LDS author, compiles a weekly newsletter for chocolate lovers, filling it with trivia, recipes, and chocolate confessions. She hopes to compile a book of unique chocolate projects for people to enjoy year-round. Michelle coordinates the professional chocolate demonstrations presented on stage. “I was very excited about the Art Institute of Salt Lake’s demonstration,” Michelle says. “They built a unique chocolate cake and finished it off with chocolate from a paint sprayer.”

As they prepared for their first show, in 2004, the women were told that focusing solely on chocolate would be too narrow, attracting 2,000 visitors at best during the two-day event. Actual attendance totaled 6,000, and the sisters’ surprised event manager dubbed their production a “Cinderella show.” Held during the week before Thanksgiving, the show’s attendance continues to increase each year.

“Some of the best chocolates in the United States are in Utah. It’s our one big buzz,” Annette says. Melanie adds, “It’s been fun to have really high-end chocolatiers demonstrating and teaching a range of people, from moms with a Hershey’s Kiss addiction to eager culinary students. Mostly we wanted to make a show for the average chocoholic, and that’s just what we’ve done.”

Sweet Above All That Is Sweet

Sister Sheri Dew speaks of grace: what it is, how it applies to us, and how we can access it.