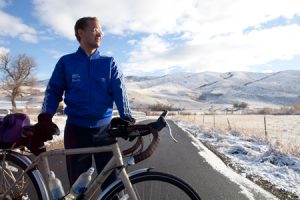 Willard White biked across the United States to thank Shriners Hospitals for helping his daughters.

Willard W. White (BS ’90) wanted to thank Shriners Hospitals for Children for its generosity on behalf of his three adopted daughters, so he grabbed his bicycle. With a cross-country ride he raised awareness as well as money for the nationwide system of hospitals.

“My wife, Laura (’92), and I had been married for 14 years before we could adopt a child,” he says. “Our daughter Marcela had scoliosis, and during the back surgery to help her condition, major complications ensued. After seven surgeries, six weeks in intensive care, and five months of physical therapy, Marcela was in a wheelchair for five years. But she reached her dream of walking across the stage to receive her high school diploma. Their second daughter, Baya, had a stroke and was paralyzed for several years. Faith, their youngest, has an underdeveloped optic nerve and other serious health problems. All three were treated at Shriners free of charge. “Without Shriners as our benefactors,” White says, “our daughters would not be doing so well today. We owe them a million dollars worth of thanks.”

Before beginning his two-and-a-half month, 12-state, 3,553.6-mile journey from the Oregon coast to Coney Island, N.Y., the educator from Morgan, Utah, prepared by cycling between 60 and 70 miles a day, six days a week. Slender by nature, he deliberately gained 10 pounds before he embarked, knowing he would likely lose weight on the trek.

Beginning his trip on May 28, 2010, White encountered two days of nonstop rain. And there were other obstacles along the way. “The mountains weren’t too bad,” he says, “because I was accustomed to them.” The wind, however, threatened his success. White nearly stopped his quest in Wyoming when he encountered five days of wind. “I was exhausted,” he explains. “I said a prayer and indicated if the wind blew any more, I was ready to stop right there. The wind changed and pushed me those last seven miles to camp.”

Maintaining his schedule was important because he had previously arranged interviews. The cyclist was featured in dozens of newspapers, television shows, and radio interviews. His wife made the trip in a van, and she reconnected with White at the end of every day. “Sometimes we camped out,” he says. “Other times Shriners would get a place for us, and several Church members also provided accommodations.”

White returned to Utah 15 pounds lighter but with several thousand dollars to donate to Shriners. White says about the journey, “A highlight was seeing the diverse geography and meeting a lot of really nice people who helped us.”

Run by BYU student volunteers, Camp Kesem is a summer camp for children whose parents have suffered from cancer.