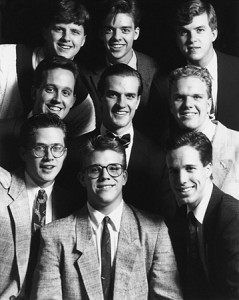 Twenty years ago J. Robert Ahlander (BA ’94) and David J. Boyce (BA ’93) were warming up with their fellow singers in the Maeser Building lounge for the first concert of Vocal Point, an a cappella group they founded.

Ten minutes prior to the concert, an usher walked in and said, “Guys, it’s full.”

“No problem,” they shrugged. “Just admit people in the second level.”

Twenty years later, Vocal Point is nationally renowned for its harmonized singing, human beat boxing, and onstage humor. In March Vocal Point celebrated its anniversary with an alumni concert. Boyce and Ahlander returned to sing with 70 other past and present Vocal Point members.

High school friends, Ahlander and Boyce roomed together at BYU and sang duets around town. Ahlander wanted to add members to become an a cappella group. Boyce wasn’t convinced, until he did an internship on the East Coast and saw a school group perform to a huge crowd (with the audience throwing dollar bills).

He returned to Utah, and the pair held auditions, adding seven vocalists to their group. With Ahlander’s marketing strategy and Boyce’s organizational talent, they were soon filling auditoriums and booking performances out of state. Then, at a suggestion from the administration, they affiliated with BYU to ensure continuity.

Ahlander says, “We not only started this for a love of singing but also as a desire to start a tradition.” He remembers his days at BYU fondly, saying that for him, “college was almost the extracurricular activity. I did Vocal Point full time.” He now manages the music and film department of Deseret Book.

After graduation and a Harvard MBA, Boyce was an early executive at a software company. He is now the CEO of Fundly, a fundraising technology company. Although he doesn’t sing much anymore, he still loves a cappella music’s ability to touch people.

“There are no special effects. . . . It’s just the singers’ voices to the audience’s ears,” Boyce says. “We are connecting with the audience in a unique way. And that’s how I saw Vocal Point—as an ambassador for both BYU and the Church. It’s about love  of music, God, and life.”