Brent L. Kamba (’14) pulled out a $100 bill, dipped it in a mixture of water and ethanol, and lit it on fire. His crowd—Ugandan teachers of middle and high school chemistry—went wild. The money caught fire, but the paper didn’t burn, and the teachers whipped out their own bills to test the principle. “Put anything of value . . . in any kind of experiment, and it will stick with people that much more,” says Kamba. He and BYU chemistry professor Jennifer Burrows Nielson (BS ’88) were in Kampala, Uganda, demonstrating experiments that can be done with limited resources.

The experiments are part of Nielson’s ongoing research to help rewrite the chemistry curriculum in Uganda, where classes are often relegated to “copying down what the teacher writes on the board,” says Nielson. 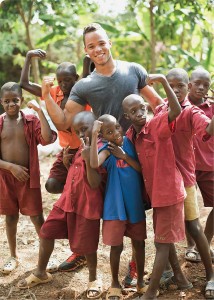 In some ways, Kamba was an unlikely sidekick for Nielson’s project; he was barely passing her organic chemistry class, after all. But when he made his way to her office to talk about his grade, the conversation meandered. Kamba mentioned his talent for African drumming—something he’s taught every Saturday for two years to Utah children adopted from Africa. He also mentioned that he had never been to Africa—where his own father was born and raised. “I just invited him right then; ‘You should come,’” Nielson says.

She assigned Kamba to develop nontoxic, low-cost experiments. He got up early for two semesters, tweaking experiment instructions here, substituting materials there.

“Keep in mind I was still bombing her class,” Kamba laughs; he ended up retaking the class for a much better grade. But Nielson never doubted his ability. “He was the perfect student,” she says—with his initiative and his
ability to connect with the Ugandans.

Kamba expresses gratitude for the BYU donor who made his work in Uganda possible. “Being in Africa, I was just in heaven,” he says. In addition to sharing experiments, Kamba was able to visit an African drum–maker village—“one of the highlights of my life,” he says. He brought home a traditional Ugandan drum and marimba, which he shared with the African children he teaches. Of his experience in Africa, Kamba says, “It was nice to finally get that complete connection to where I came from.”

Kamba hopes the experiments he dreamed up will help chemistry come alive for Uganda’s children. “To me, development means working with kids and teaching them,” says Kamba, who hopes to be a pediatrician. “They’re the future of the world,” he says. “[And] if they can wrap their heads around chemistry, they can learn anything.”

With persistence and courage, Toupta Boguena is paving her own road to success.