Anyone climbing Y Mountain early in the morning is likely to encounter Guy C. Larson (BS ’87), hear his booming “Good morning,” and receive the high five he bestows on nearly everyone he sees. Larson enthusiastically scales the mountain daily—except Sundays—as a way of strengthening lungs that were damaged when he caught a respiratory infection from his daughter several years ago.

“My lungs were a wreck,” he says. “I went through cases of bronchitis and double pneumonia and felt as if I were drowning in my own lungs. After being bedridden for five months, I tried to go to church. Just taking a drink of the sacrament water was enough to chill my chest and prompt major coughing convulsions. I left the meeting heartbroken.”

After his doctors indicated he would live a life hampered by health limitations, Larson decided to challenge that diagnosis and see what he could do to improve his lung capacity. 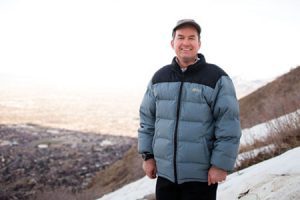 Reaching the Y for the first time was an unlikely feat for a convalescing Guy Larson. But now, after more than 1,500 trips up the mountainside, it’s just another morning jaunt.

“Before this happened, I was not much of an outdoors person and had no exercise routine,” he says. “But that changed when I got sick. I had no intention of becoming an invalid.”

Larson’s solution was to hike the Y. “I decided to force myself to exercise. I live near Kiwanis Park at the base of Y Mountain, but I had never hiked the Y.” He opted to go out early on July 2, 2004, so he could climb in the shade of the morning.

“The hike has 12 switchbacks, and the first two are the longest,” he says. “As I hiked them that first day, I coughed uncontrollably . . . . I didn’t think I could go on.”

He persisted, however, and eventually reached the top. “I was thrilled to death. I told myself I was going to do it every single day because I knew if I managed it today, it would be easier tomorrow. I also knew if I waited a week or so before trying again, I would lose everything I had gained. Climbing got easier over time.”

When he had been hiking about a year, his car was totaled in an accident, which prompted him to start from his doorstep instead of the trailhead. “More exercise,” he says.

Larson enjoys hiking with his children or with anyone else who wants to make the trek with him. He once helped haul a girl in a wheelchair to the Y. Another time he led a blind woman who complained with every step but was ecstatic when she achieved her goal.

Now in his sixth year of hikes, Larson estimates he has reached the top more than 1,500 times. In the winter he throws on nine layers of protective clothing, which allows him to trudge through snow that can be knee deep at the top switchbacks.

He eventually reached a point when hiking to the Y stopped being much of a challenge. “I ran into a regular hiker who suggested I go beyond the Y and told me about several trails. It has been exhilarating,” he says. “It is really fun to reach the top of the mountain and watch the shadow of the mountain pull back over Utah Lake and over the city. You watch lights come on here and off there. It’s like watching the town wake up.”

After more than five years, Larson has come a long way in his health, though he is still occasionally reminded of the scar tissue in his lungs. “Just don’t tell me a joke while I am eating or drinking. [The food] goes deep in my lungs and [it] can take me 20 to 30 minutes to cough it out,” he says. “But really, that’s just an annoyance. More important . . . is my realization that we are all dependent on the Lord for every breath we take, and hiking has been a huge spiritual blessing for me.”