In her literature classes at BYU Kathryn Lynard Soper (BA ’93) found herself repeatedly drawn to women’s voices and stories. After graduating, however, her passion for literature about the female experience lay dormant while she raised children. When her sixth child was born prematurely, however, she felt the need to express herself. 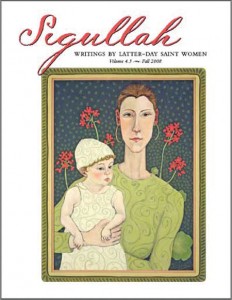 Soper organized a writing group with old BYU friends Kylie Nielson Turley (BA ’94) and Justine Sirken Dorton (BA ’93). The group had existed only a few months before the women decided to create a forum for other women to participate.

The result was Segullah, a literary journal created in 2005 that publishes submissions by Latter-day Saint women from all over the world. The founding members became editors and advisors on the Segullah staff. “[Creating Segullah] was really exhilarating because it called on skills that I hadn’t used very often since becoming a mom,” says Soper, who became editor-in-chief.

Segullah means “treasure” in Hebrew and is a word the Lord used to describe his covenant people. Soper says the editors decided to make the biannual journal available free online so it would be accessible to as many women as possible. They also have published two books on motherhood and maintain a blog that promotes faithful discussion of issues relevant to LDS women.

“There are ways to have respectful and even loving conversations about really difficult topics that can still promote faith and love of God and respect for the authority of the Church,” says Dorton, managing editor.

“The sharing of stories is a really effective way to establish community,” says Soper. “It helps the writer process what she has experienced and its significance. And she passes on that benefit to others who can learn vicariously through her experiences.”

Joseph Hoffman and his wife, Kelly, began a piano academy that now reaches thousands of students around the world.

Mott spent the last 2 years creating six paintings focusing on the experience of women during the Nauvoo era.