With a Little Bit o’ Luck

Eliza Doolittle may end up with the professor in My Fair Lady, but the actress who played the starring role in the recent Broadway tour tells it differently.

As Eliza Doolittle in the Broadway touring company of My Fair Lady, Aurora Florence Dickamore (BFA ’11) liked to joke that Eliza doesn’t end up with Henry Higgins—she runs off with the chauffeur.

The chauffeur, after all, was played by her real-life husband, Jeffrey H. Dickamore (BA ’09).

The couple married in the summer of 2011 and soon took to the road as cast members, having an extended honeymoon traveling across the country. Living on one per diem, the couple banked the other to save for their future apartment in New York. 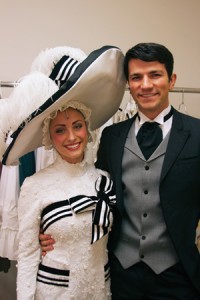 Aurora and Jeff Dickamore take a breather backstage while touring as cast members in My Fair Lady.

“I was thrilled when I got the part,” Aurora says, “and so happy when the producers auditioned Jeff after they learned he also performed. Casting him meant we could be together almost full time.”

Although Aurora had the starring role in My Fair Lady, Jeff was the star and she was in the cast when they shared the stage in the 2010 Nauvoo Temple Pageant: he portrayed Joseph Smith, and she played Scottish immigrant Becky Laird.

“While we had known each other for three years, our romance blossomed in Nauvoo,” Aurora says. “Cast members are not allowed to date, but shortly after our run ended, we figured out we really cared about each other.”

They returned to Utah, where Jeff worked on screenplays and was a production assistant on the film 17 Miracles while Aurora finished her degree in music dance theatre and made helpful connections.

One connection was Rance W. Wright (BFA ’06), who works beside major New York agents and casting directors to provide a network for would-be performers to meet theater professionals. Wright got Aurora in contact with Alison Franck, casting director for the My Fair Lady touring company. Aurora sent Franck a headshot and résumé and received an invitation to callbacks. Although she had school in Utah, she flew to New York, had a 30-minute audition, and was cast in the lead part.

Aurora says being on a Broadway tour with her husband was amazing, although living on the road was tiring, especially when they frequently worked in a city for only one day. While on tour, starring in 136 performances in six months, Aurora said: “We get up early, ride on the bus, perform that night, go to bed, and repeat the process the next day. I’m not complaining, but it has its challenges. We use computers and phones to connect with the rest of the world. On the plus side, I’m having a lot of fun with a talented and supportive cast. We are making many new friends, and I recognize this is an amazing opportunity.”

After the My Fair Lady tour ended in March, the Dickamores moved to New York, where they have several connections and will audition for shows. Jeff is also eager to embark on a film and writing career.

“I could see us doing another tour,” Jeff says, “but both of us love film and hope eventually to have a strong presence in the film industry.”

“BYU prepared me exceptionally well for my profession,” Aurora says. “I love performing, singing, acting, and dancing, and I know I’ll always be involved in the arts. I will need to figure out a way to do it with a family, though.”

Aurora’s mother, Laree Fletcher Florence (BS ’86), started a performing arts program, Take Note Troupe, to prevent Aurora from facing the same struggles she’d had with the standards of her community theater. Take Note allowed Aurora to study theater with a focus on family values, and Aurora has considered someday following her mother’s example and running her own theater program. “For now, Jeff and I are having a once-in-a-lifetime adventure.”

$4 Million to Play With