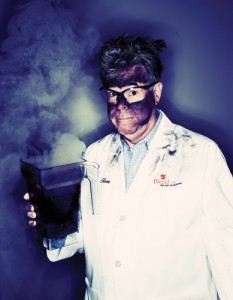 Tom Dickson frequently wonders aloud whether his blender will triumph over cell phones, canned food (in the can), or video games. As he has proven for millions of online viewers, odds are great it will.

Soon after he was hired as marketing director for a blender company, George R. Wright (BA ’93) took a walk through the manufacturing plant and noticed sawdust and wood shavings littering the floor. Curious, he asked whether new construction was under way. “No,” he was told, “it’s just Tom doing his destructive testing.” 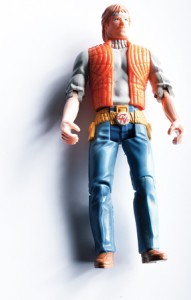 For years, inventor, engineer, and CEO Tom Dickson (BS ’71) regularly crammed 2×2 boards into blenders and ramped the machines up to full speed. He wanted to see what he would destroy—the blender or the wood. The appliance typically won, and the boards were reduced to piles of dust. The exercise was Dickson’s way of testing the durability and power of the Total Blender, the retail entry line from Blendtec, Dickson’s food processing appliance company in Orem, Utah.

When Wright learned of Dickson’s unusual quality-control technique, sirens started going off in his head. “I realized that with the right marketing,” Wright says, “we could make millions aware of this powerful blender. I wanted people to know this is not your regular machine.”

Wright took $50 and bought a lab coat, marbles, a rake, a six-pack of soda, a fast-food value meal, and golf balls. He tossed the coat to Dickson, put him in front of a camera, and asked him to blend the purchases.

The marbles became a glassy dust and the rake handle a pile of slivers. As a new twist on recycling, the soda was transformed into a smoothie with minute flecks of aluminum. The golf balls—also pulverized—offered a new definition for slicing the ball. The value meal, the only blend safe enough to do at home, became a liquid concoction that was edible, if not appetizing.

This marked the start of Will It Blend?, a series of YouTube videos that began in October 2006. They were an instant success. “We had 6 million hits in the first week, and it didn’t take us long to realize we had hit a home run,” Dickson says. “It amazes me to think when I was told it would be on YouTube, I said, ‘Who Tube?’ I had never heard of it, but I’m glad I listened to George.”

Within two years, the campaign helped increase retail blender sales 700 percent and turned Dickson into an Internet celebrity. In 2008 Blendtec received a Clio Award for viral marketing, a category that awards electronic word-of-mouth advertising. It also earned the .net Award for the best viral marketing site in 2006 and made the YouTube Awards short list in 2007.

Dickson, as it turns out, makes an ideal spokesman. “His manufacturing plant is his playground, and he has a lot of fun there,” Wright says. “Tom is exactly as you see him on YouTube—lively, interested, and smart. While he didn’t understand social media when we started this, he was a natural in front of the camera. He just took his blender and did his thing. When you go online, you get a true sense of Tom being Tom.” 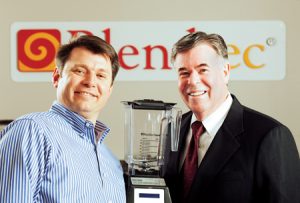 In the videos, Dickson stands behind his blender, an impish grin conveying lighthearted glee as he mixes dozens of unlikely items. He has blended a lava lamp, a global navigation system, nutcrackers, athletic shoes, and a Rubik’s Cube. He even mixed several light sticks, turning the blender into a glowing 12-hour lantern. His most popular mixture to date has been a pulverized iPhone. This segment has had more than 6 million views on YouTube with millions more on WillItBlend.com.

Dickson has become so well known that he was only a little surprised when a group of strangers in Peru greeted him as he prepared to board a plane for the United States. “I rarely go anywhere without being recognized,” he says.

Appearances in other media venues have contributed to his celebrity. His story has been told in The Wall Street Journal, Forbes, and BusinessWeek. He has appeared on The Tonight Show, CBS Sunday Morning, The Today Show, and iVillage Live. The Discovery Channel featured Dickson on Time Warp, showing a few of his blends in extremely slow motion, and the History Channel’s Modern Marvels dubbed the machine the world’s strongest blender.

“He never slows down,” says Dickson’s wife, Beverly. “You just have to hang on for the ride. Tom will be 63 in July, and if anyone loves to get up in the morning and go to work, it’s Tom.”

Dickson’s inquiring mind began with his parents. His father did creative photography and his mother, a beautician, invented a permanent wave solution. 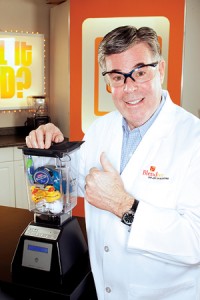 “Both of Tom’s parents were wonderful about encouraging his creativity,” Beverly says. “They knew what I know: he will not live long enough to complete all the inventions in his head.”

Dickson grew up creating, inventing, and improving things, including making modifications to his motorcycles and go-carts.

“Tom used the family’s lawn mower motor for his go-cart, and every Saturday he would need to put it back on the mower,” says Floyd Johnson, Dickson’s uncle.

“Tom does not like to be defeated by a problem,” says Kenneth M. Woolley (BA ’69), Dickson’s childhood friend. “He loves anything mechanical and dives right into challenges.”

Richard C. Galbraith (BA ’71), a friend for 45 years, calls him the same kid he was nearly half a century ago. “He’s a highly gifted engineer who is a bit childlike. You would have to be to put glow sticks in a blender.”

Dickson’s professional career began with Alza Pharmaceutical after graduating from BYU in engineering. While there, he developed a motion-sickness patch and an ocular insert for glaucoma patients. He also studied the permeability of plastics to see how water and drugs pass through them.

“I always wanted to see how to improve processes,” Dickson says. “My passion is to help people have a better life.”

His work with plastics soon prompted other explorations. He realized many people were storing wheat in plastic buckets and saw that, over time, moisture would permeate the plastic. Dickson began testing different materials for packing wheat. During his tests, a bit of wheat spilled, and Dickson sucked it into a vacuum cleaner. Some of the grain came out through the vacuum’s exhaust, and he noticed the vacuum motor had produced a finer grain of wheat. He vacuumed again, and the result was an even finer grain. Intrigued, he bought a $10 vacuum cleaner motor, made some modifications, and invented a high-speed wheat grinder.

Dickson began making wheat-grinding mills in his garage, and they became the springboard for his career. More than 30 years later, he still sells wheat mills, but they account for only 3 or 4 percent of his Blendtec business.

While Dickson’s prominence has come from his retail blender, a majority of his business comes from more powerful commercial blenders, one as large as a refrigerator that makes a custom-blended smoothie and dispenses it into a cup, all at the touch of a button. He supplies products for many national customers in the food-service industry, including a smoothie chain that wanted to use his machines but could not afford them. Dickson suggested a compromise: rather than pay for the machines up front, the company could simply give Dickson a nickel per drink. Fifty million smoothies later, Dickson realized he had made a great deal.

The power of Dickson’s blender comes from a few key features. Many blenders operate with 500 watts but Dickson’s retail blender runs on 1500. It also doubles as a mixer and food processor, and Wright points out that the higher power is helpful for making soups, sauces, and dips, or for grinding wheat for pancakes or popcorn for
cornmeal.

Woolley, a member of the company’s board of directors, says the blender also has a high-tech aspect to it. “It is programmable—and programmable�for a lot of different cycles,” says Woolley. “When you blend different things, you may need different blend speeds, . . . and you may also need variable speeds at different points of the blend. Tom has invented the ability to optimize the blend cycle for particular items.”

Add an extra-strong blender jar and a special blender blade, and you have the Total Blender. Stanley Winters manufactures the Blendtec blade in China and says, “I’m very proud of that blade; Tom has put it through the war.”

As each episode of Will It Blend? begins, viewers are invited into a studio with walls splashed in crayon shades of red, yellow, and orange while chirpy music (reminiscent of ’70s dating and newlywed game shows) serves as theme music. A large, bright yellow-and-red swirl on the wall is the company’s logo and represents a bird’s-eye view of a blender.

Dickson often does not know what he will be blending in advance, and the element of surprise pleases him as much as his production team.

“Will It Blend? has totally changed the way I shop,” Wright says. “It seems like anytime I am in a store looking at a product, I find myself wondering if I could fit it in a blender jar.” The team has also drawn blending ideas from hundreds of thousands of fans worldwide.

Although Dickson usually anticipates the end results of the blends, some mixes take him by surprise, such as the stench that permeated the studio after he mixed hockey pucks. Much of his taping is unscripted because the goal is to capture Dickson being himself, and he offers a breezy commentary while preparing his unlikely mixtures.

During the recent presidential election, the blending junkie introduced one episode by saying he was going to help Democrats and Republicans cooperate better by blending them together. He placed a hard plastic donkey and elephant into the jar and declared he was exercising his right to vote by pushing the ballot button. When he removed the lid, he examined the contents and said, “Political smoke. Don’t breathe this.”

In addition to “Will it blend? That is the question,” the phrases “____ smoke. Don’t breathe this,” “Yes, it blends,” and “Don’t try this at home” have become signature statements.

Perhaps Dickson should have followed his own advice when attempting to blend six Bic lighters. The package warned, “Keep away from children,” but since it said nothing about engineers who invent blenders, he dropped all six lighters into the jar.

When the butane hit the motor, sparks from the motor ignited the gas and blew the lid off the jar, shooting flames three feet into the air. With his wide eyes, soot-covered face, and singed eyebrows, Dickson was completely believable when he concluded the episode saying, “You really shouldn’t try this one at home.”