By Charlene Renberg Winters in the Summer 1999 Issue

When Mack J. Wilberg joined the BYU music faculty in 1984, he was still in his 20s and completing his doctoral degree from the University of Southern California. After being named USC’s outstanding graduate at the Doctor of Musical Arts level, he was ready to embark on a long academic career that would embrace his talents as a choral conductor, pianist, accompanist, composer, and arranger.What he did not realize was that he would be leaving BYU in less than 15 years to become the associate director of the world-acclaimed Mormon Tabernacle Choir.Wilberg has worked with thousands of students in BYU’s Men’s Chorus and Concert Choir–both prestigious audition choirs. An internationally-acclaimed composer and conductor, he has served as director of choral activities at BYU since 1985. Choosing to leave was difficult. 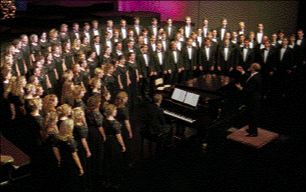 Wilberg’s wife Rebecca, also a musician, explains that her normally reserved husband usually lets his music speak for him. He was willing, however, to express his appreciation for BYU and his anticipation regarding his new position.

“I have never had such a difficult decision in my life,” he says. “I have loved every dimension of my life at BYU, particularly working with the students. During some serious soul searching, though, I asked myself if I would be doing the same routine the next 20 or more years if I stayed at BYU. I also asked myself if I were up for a new challenge.”

He opted for the challenge and says, “By nature I am motivated by projects; the Tabernacle Choir is full of them. I’ll be striving to reach some high expectations, and with the choir, those expectations are there every week. My professional life as I know it is going to change in every way.”The 325-member choir will undergo some changes when Wilberg arrives this summer. For example, smaller performances are planned with the newly formed Temple Square Chorale under Wilberg’s direction.“The choir is excited to have Mack come,” says Cecelia Fielding of Orem, Utah, who has sung with the choir for 12 years. “Mack has brought the Men’s Chorus and Concert Choir to sing with the Mormon Tabernacle Choir during the past several years, and we have always found him a delight to work with. He is pleasant, funny, and precise. I think his strength will be what he brings to us as a composer and as a person.”

While the Tabernacle Choir looks forward to his arrival, Wilberg’s decision to leave BYU has disappointed some students–and some parents who wanted their children to sing in his choirs.His contributions as a teacher were noted in 1991 when he received a Distinguished Faculty Teaching Award. The award citation read, in part, “Mack Wilberg is a composer, arranger, conductor, and pianist with an international reputation. But most of all he is a master teacher. . . . One student wrote, ‘I am amazed at his ability to motivate 150 tired singers to sing as they have never sung before. . . . [He] sees more than 250 students every day and knows each by name. . . . No teacher has been more influential and more inspiring to me than has Dr. Wilberg.'”
Wilberg’s work with the choirs is worthy of the accolades. Under his direction the Concert Choir appeared with the Utah Symphony on three different occasions as part of its subscription series. The Concert Choir has been featured on several national broadcasts and was videotaped, with other BYU choirs, for A Thanksgiving Celebration of American Folk Hymns and A Celebration of Christmas, which have been repeatedly broadcast over PBS stations throughout the nation.Under Wilberg’s direction the Men’s Chorus has expanded from 45 voices to more than 240 voices, an achievement that prompted Choral Journal to recognize the choir as one of the outstanding and unique collegiate choral organizations in the nation.“I remember thinking it would be wonderful if we could get this chorus up to about 100 singers,” Wilberg says. “Although it was an audition choir, nearly anyone who could carry a pitch was admitted. Now I have more than 400 males audition each year. I think the wide variety and versatility of music has enhanced the growth. One of the pieces, ‘Betelehemu,’ is considered an initiatory piece, and the singers don’t consider themselves fully in the group until they sing it.” For his last semester, Wilberg admitted 258 men to the choir so that more students could have this experience.Wilberg is equally accomplished as a composer and arranger. His works have been featured on national programs in Germany, Hungary, and Norway, as well as in the United States on syndicated radio programs like The First Art and All Things Considered. The Bach Society of Minnesota commissioned his “Season Songs” for performance at the 1995 national convention of the American Choral Directors Association, and his work has been honored three times by the American Society of Composers, Authors, and Publishers.His compositions and arrangements continue to be performed and recorded by professional, university, high school, church, and symphony choruses throughout the United States and abroad.

An accomplished pianist, Wilberg is also an acclaimed composer. Choruses around the world have sung his works.

The power of Wilberg’s music was apparent at the March 30 devotional he led in the Marriott Center. As Men’s Chorus and Concert Choir sang his arrangements of “Beautiful Savior” and “Redeemer of Israel,” blending their voices in soft supplication and resounding praise, it was easy to believe that Jesus “makes the sorrowing spirit sing” and that “the hour of redemption is near.” Wilberg’s music does indeed speak for him.James Kasen, who has worked with Wilberg as one of his two assistant conductors during the past six years, expressed affection for his colleague by telling the Men’s Chorus, “I am a better person because of his love, his investment, and his good and godly influence. Were it not for him, I would be much less of a person and a musician than I presently am.”Kasen believes this new position with the Tabernacle Choir is ideal for Wilberg. “One cannot partake of a musical experience with Dr. Wilberg and not know how the Lord works with his children,” he says. “Dr. Wilberg has not merely exposed us to great music, but he has also served as solid evidence that the Father can do his work through those who are willing to give him full rein. It is no surprise to me that his next post will be to serve as a light that will brightly beam with greater circumference and thus reach and warm the world more fully.”