What’s White and Blue and Read All Over?

In the final years of Brigham Young Academy, just before the turn of the century, a close-knit group of 766 students lived and studied on Provo’s fledgling campus. Coal heated the buildings. The recent installation of electric light was the latest buzz. You could buy a book for a nickel, and 50 cents got you a subscription to the White and Blue, BYA’s student-run newspaper. 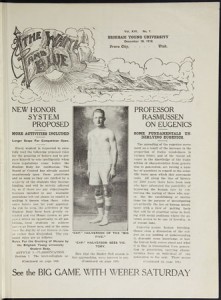 Now, 112 years after the White and Blue first went to press in 1897, its aging pages are being digitized for historical preservation and online access.

J. Gordon Daines III (BA ’97), BYU’s university archivist, says reading the White and Blue can be “sort of addicting.” Now that it’s digitized, readers worldwide can learn about campus life during World War I, the early days of BYU football, and the exploits of students as they helped to lay the foundations of the university.

In its early form, the White and Blue resembled a literary journal more than a newspaper, with varied writing focused on art and education. But it also offers a clear, often humorous, insight into college life from 1897 to 1921. A recurring section called “Things We Want to Know” wonders “Who Miss Reynolds is winking at in literature,” and “Why Neff can’t get a girl.” And while many things have changed, much has stayed the same, such as parking complaints: a 1913 editorial scolds students for feeding their horses on the south side of campus. “Animals will not starve during the brief period between classes.” Between Nov. 5, 1913, and Jan. 14, 1914, a debate flared concerning who was entitled to wear “the lone Y”—the school’s official emblem worn only by athletes.

Notable alums and BYU leaders such as Eugene L. Roberts (AB ’16) and Ernest L. Wilkinson (AB ’21) served on the staff during their time.

“What the White and Blue allows us to do is get a better feel for the time period,” says Daines. “You get to see, from their perspective, what was important to [students].”

Lessons from a Letter

The Y on the mountain above campus reminds us that perspective matters and failure is not final.

Good Taste: For Your Spring Table