In a stirring ceremony Kevin J Worthen is inaugurated as the university's 13th president. 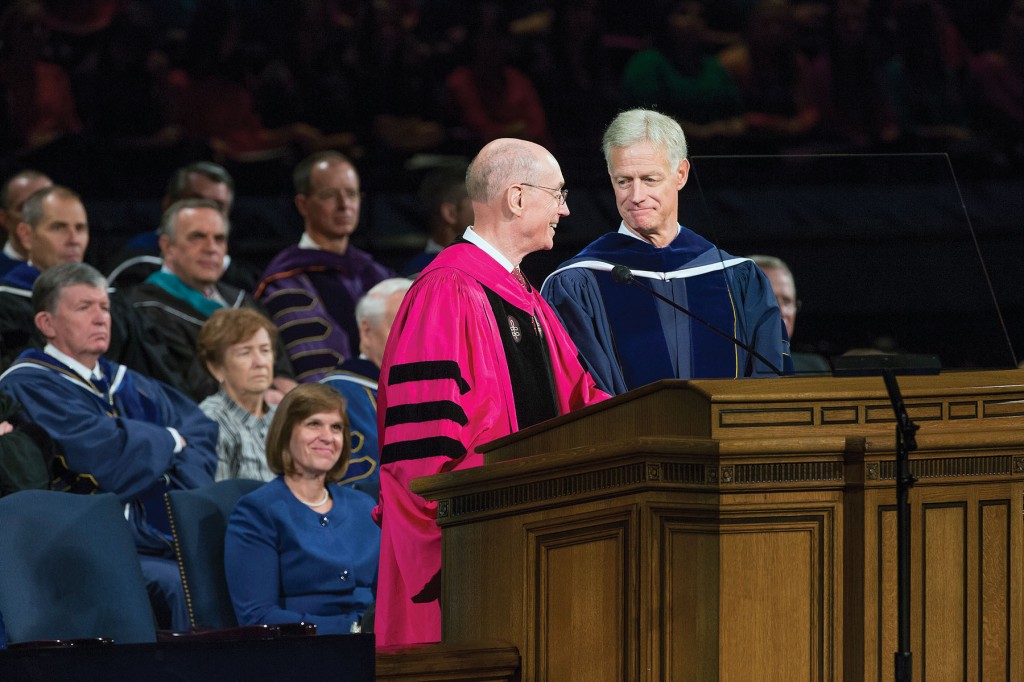 Sheets of rain and thunder echoing off the mountains on Sept. 9 didn’t deter the nearly 20,000 people who trekked to the first devotional of the new school year. At this unique meeting, students and staff stood as the First Presidency and other members of the BYU Board of Trustees, former BYU presidents, and other dignitaries marched into the Marriott Center to a fanfare of trumpets and crashing cymbals. They’d come to see Kevin J Worthen (BA ’79, JD ’82) inaugurated as the 13th president of Brigham Young University.

During the installation ceremony, President Henry B. Eyring—aided by Worthen’s wife, Peggy Sealey Worthen (BA ’03)—hung a presidential medallion featuring an engraving of Y Mountain around Worthen’s neck. Worthen explained his choice of Y Mountain as a symbol for his time in office: “Mountains . . . are locations where people can be enlightened, uplifted, and changed. The learning process to which we are committed should do the same. It should be education that elevates and etherealizes. . . . I hope the mountains that surround us will be reminders of that aspiration.”

“We need to provide an education that allows our students . . . to become different, better people.” —President Kevin J Worthen

Standing in front of officials bedecked in academic regalia, President Worthen presented his vision for the university. “The learning process will not be complete unless it becomes engrained in [students’] character, unless it becomes part of who they are. We need to provide an education that allows our students not just to learn new things and to experience spiritual insight but to become different, better people,” he said.

President Eyring expressed confidence in Worthen’s ability to move BYU forward into a bright, but demanding, future. “President Worthen will be calm and wise when faced with the challenges that will come. He will move quickly and confidently to help individuals in need. But he will be at peace about the university itself because it and those who study here and teach here are on the course set and maintained by the long line of those who have served before him.”

Though Worthen has spent many years at BYU as a student, professor, and administrator, President Eyring concluded his remarks with a welcome: “On behalf of the board of trustees and all who love this university, I say to President Worthen and to his wife, Peggy, ‘Welcome, we love you, and Godspeed.”

To the Mountains We Go

In his inaugural address, President Kevin J Worthen articulates an upward climb both challenging and exhilarating.

President Kimball shares his vision for the university’s next one hundred years in this landmark speech.