Watch Why You Eat

A BYU health sciences professor says eating motivation may have more to do with obesity than diet content.

From the Atkins diet to Body for Life, it seems more Americans than ever are trying to lose weight. But according to nationwide statistics on obesity, these and other weight-loss methods are much more successful on the New York Times bestseller list than they are in long-term weight reduction.

Despite attempts by private and governmental entities to educate people about the dietary causes and harmful effects of excess body fat, the prevalence of adult obesity has doubled over the last two decades. BYU associate professor of health sciences Steven R. Hawks, ’82, feels that restrictive dieting and the pervasive pressure to be thin are actually contributing to this increase rather than slowing it down. “At this point, there is every indication that obesity levels for all ages and both genders will continue to increase unless major changes are made in our weight-management strategies,” says Hawks.

To help Americans gain control of their waistlines, Hawks looked across the Pacific to Japan. By comparing the two cultures’ attitudes toward eating, Hawks is learning that why Americans eat may be as important as what they eat.

But why Japan? The country is a good foil for the United States for several reasons, Hawks says. First, like the United States, Japan has gone through a nutritional shift from traditional to modernized diets, which include more processed and fat-laden foods. Second, Japanese society places similar value on thinness. Despite this, Japanese on the whole don’t share their American counterparts’ obesity problems, having lower readings for body mass index, a measure of weight relative to height. They also have lower rates of eating disorders. 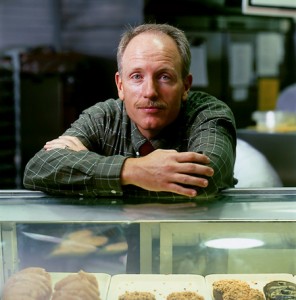 In a multinational study of cultural attitudes toward eating, health sciences associate professor Steve Hawks learned that why we eat may be as important as what we eat. Photo by Bradley Slade.

To better understand these differences, Hawks led a team of researchers from both countries in studying young-adult populations and their motivations for eating. With the help of BYU health sciences associate professor Ray M. Merrill, ’86, graduate student Hala N. Madanat, ’04, and research assistant Marylynn B. Goudy, at Utah State University, as well as associate professor of nutrition Takeo Miyagawa of Otemae College in Osaka, Japan, Hawks collected more than 1,200 responses from college students and developed a “Motivation for Eating Scale.” The answers were compared to the respondents’ body-mass-index readings and the motivation scale to determine how attitudes toward eating relate to obesity.

The research, published in the June issue of Health Promotion International, showed that the Japanese don’t share Americans’ love-hate relationship with food. Hawks says this stems from their different motivations for eating. “Americans primarily associate food with health objectives—such as being thin—and least with the simple pleasure of a satisfying meal,” says Hawks. “The Japanese, on the other hand, have managed to maintain a more healthy relationship with food in terms of diversity of diet. They focus less on the restriction and deprivation that go along with trying to be thin.” For instance, the study showed that Japanese women, although they value thinness and diet at high levels, do not seem to deprive themselves of favorite foods to the same extent as American women. While they still watch their calories, they tend to not entirely swear off favorite foods.

Americans tend to be out of touch with what their bodies really crave nutritionally, Hawks says. “We either restrict calories to be thin, or we eat mindlessly in response to our emotional needs. Rather than eat because we’re hungry, we’re more likely to eat out of boredom or in response to other emotional cues.” One finding showed that U.S. college students are much more likely to eat while watching TV or a movie than their Japanese counterparts.

The study also suggested that Americans who consider weight loss as important or who think a lot about dieting are more likely to engage in emotional eating, which may underlie more serious disorders, like anorexia and bulimia. Kara L. Ohlsen, ’99, a recreation therapist at the Center for Change in Orem who treats women with eating disorders, confirms that her patients’ negative emotions are only amplified by America’s obsession with food and thinness. “Problems with eating disorders worsen as the media puts an emphasis on thinness—as models get thinner and thinner,” she says.

The study highlights the need to broaden public health policies that address cultural values in relation to body image and self-esteem, rather than merely focusing on nutritional value and serving size, says Hawks. He advocates weaving cultural attitudes toward body image and food into American health policy.

“The American emphasis on thinness needs to be replaced with a sensitivity to cultural influence and an emphasis on fitness and wellness,” he says. Americans should also be aware that the very practices they are using to achieve or maintain thinness are potentially ineffective. 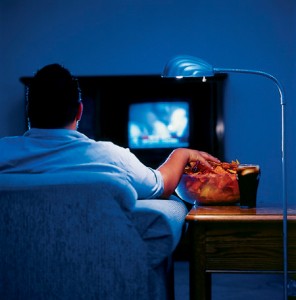 Hawks’ study found that Americans are much more likely than Japanese to eat in response to emotional cues and while watching TV or movies. Photo by Seth Smoot.

“American dieters’ rigorous restriction of food intake as a way to control weight often backfires on several levels,” says Hawks. Not only does it decrease the body’s metabolic rate while increasing the level of fat storage—both factors that stimulate weight gain—it also creates an artificial relationship with food, where cycles of deprivation and binge eating may replace a more normal relationship with food that revolves around the pleasurable satisfaction of hunger.

To help people develop a more healthy relationship with food, Hawks suggests the concept of intuitive eating, which encourages individuals to replace restrictive dieting with a more natural and nurturing approach to food. In short, the goal of intuitive eating is to base food choices on the internal prompts of hunger and appetite satisfaction rather than on diet plans, caloric content, or emotional cues. Food selection that satisfies the body’s physical appetite, Hawks theorizes, will also result in a well-balanced diet and a healthy weight.

To test this theory, Hawks is expanding his cross-cultural studies to determine if intuitive eaters are more likely to score well on other indicators of good health, such as physical activity, low blood pressure, and low levels of body fat and cholesterol. Studying populations in Japan, China, Thailand, the Philippines, and the United States, he hopes to further pinpoint which cultural eating habits are most likely to promote good health. Eventually, he hopes to find out if intuitive eating can be taught and sustained over a long period of time.

Hawks’ interest in culture and obesity has also led him to study various racial and ethnic groups in the United States. In research published in the March issue of theAmerican Journal of Health Education, Hawks and Madanat noticed a disproportional effect of obesity and its related illnesses among certain groups. Based on available obesity data, they identified unfavorable disparities for Native American, African-American, and Hispanic populations as compared with Caucasians.

Through cultural studies like these, Hawks hopes to draw attention to the cultural aspects of obesity and to improve methods of countering obesity, thus improving health and extending lives.

“It is our hope that public health professionals will go beyond traditional explanations for obesity and begin to appreciate the importance of culture in determining eating styles—and ultimately obesity,” says Hawks. “Such a recognition will ideally lead to a broadening of prevention and education strategies that might be more effective in halting the rising rates of obesity in the United States.”

BYU dating is not for the faint of heart.