By Charlene Renberg Winters ’73 in the Winter 2002 Issue 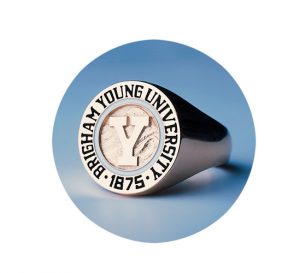 BYU starts new tradition with single ring program.FOR the first time, BYU students and alumni will be able to purchase the same BYU ring. Beginning this spring, the university will introduce an official school ring available to anyone with 60 credit hours or more. With this single-ring program, all students and alumni can wear a ring with the same design.The BYU Alumni Association, BYU Bookstore, university officials, and student leaders joined together to develop this program and have emerged with a ring they believe represents the honor and traditions of BYU.“The goal has been to create a symbol that will immediately identify the individual as a graduate of BYU,” says Roger L. Reynolds, ’73, director of the BYU Bookstore. “The idea of having a unique ring design for all graduates is an old one for many schools. In the late 1970s, however, most institutions abandoned this philosophy in favor of allowing students to express their individuality by designing their own rings. Additionally, the customized rings were available to anyone. An individual did not even have to attend the school to be able to purchase a ring.”Recently many universities across the country have returned to the idea of a single ring that captures school tradition.The BYU signet ring, available in either yellow or white gold, features a block Y superimposed on a mountain background and surrounded by a circle of white representing Karl G. Maeser’s legendary chalk circle of honor. The inside of each official ring is etched with “Go Forth to Serve.” Students and alumni may also have their initials, degree, and graduation year engraved on the inside of the ring. As a special feature, BYU has arranged for each ring to bear its own registration number. The number allows the institution to identify the owner if the ring is ever lost and returned to the school.“The official Brigham Young University ring is a link with classmates and friends,” says J. Michael Busenbark, ’72, executive director of the Alumni Association. “Times will change, but the ring should stay the same. Some schools have retained the tradition of a single ring throughout the years, so people who graduated from a college in 1939 have the same ring design as those who graduated in 1999. There is something special about sharing the same symbol as others who graduated from your school.”According to Busenbark, the Alumni Association and Bookstore have been working on the ring idea for more than three years. They took it to student groups, alumni, and university administrators and received very positive feedback.One of the advantages to the single-ring program is the exclusivity of an official ring. Students can no longer simply walk into the bookstore or call in a phone order. In addition to needing 60 credit hours, students and alumni must be in good standing with the university to be eligible to purchase the ring.A portion of the ring sales will help fund student grants and Alumni Association programs.Web:alumni.byu.edu

To Behold and Be Held

BYU students flocked to the Harold B. Lee Library for the chance to hold a first-edition copy of the Book of Mormon.

An alumna entrepreneur uses her pearl jewelry business to provide help for Filipinos in need.