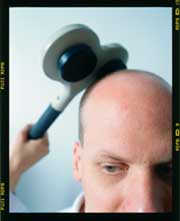 You can’t find any classrooms on the 12th floor of the Spencer W. Kimball Tower, but serious learning is still taking place there.Inside the newly remodeled Brain Instrumentation Laboratory, undergraduate psychology student Brian J. Higginbotham lifts a “transcranial magnetic stimulator”—a hand-held instrument that looks like rubber-coated Mickey Mouse ears stuck atop a magic wand—and gets ready to research.The stimulator, a key component in Higginbotham’s study on treating serious clinical depression, creates a magnetic field that is supposed to “realign” disrupted regions of the brain to a normal state. Already being used in parts of Europe, the treatment has not been approved by the U.S. Food and Drug Administration. That’s why Higginbotham, garbed in a white lab coat, is trying to determine if the stimulator really does what it claims to do and if it’s safe for humans. 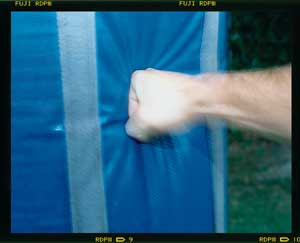 “Research ignites a spark for learning that leads them to further research and study.”

“Will this method one day be the way people fight depression? Who knows? It could be the treatment of the century, or it could be forgotten in 10 years,” says Higginbotham, a native of Monterey, Calif. “If I discover something significant, great. If not, I’ll still feel like this whole thing has been worthwhile.”And BYU administrators agree. In December 1999, the school’s Office of Research and Creative Activities (ORCA) awarded 238 undergraduate students $1,000 scholarships to fund research projects and other academic ventures. Proposals for money—557 in total—came from almost every department on campus. 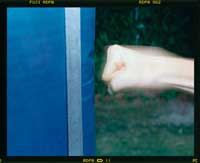 Although sources other than the ORCA scholarship fund undergraduate research on campus, the program is a catalyst for research by a large number of students who otherwise may not have a chance to participate in such projects. Along the way, some students uncover quality findings that may someday lead to changes in people’s lives. Recently, ORCA funded studies that examine Utah’s ban on public smoking, the impact that leaping in Irish dance has on a dancer’s shins, the factors that influence a woman’s choice to nurse her baby, and the coping responses of siblings of children with disabilities. As these examples suggest, asking students to come up with ideas for viable research projects causes them to stretch their minds as they seek to define the unknown and open new doors of understanding. And that, says Higginbotham, is important not only to him as a current BYU student, but to those who come after him.“The only reason we know the things we know today is someone made the effort to research and learn them yesterday. A big part of researching is sharing your knowledge with other people. In essence, you’re paving the way for future learning,” says Higginbotham, adding that research is, in that sense, a service to humankind. “The whole point of research is to enrich the human experience, to help people have happier, healthier, and more enjoyable lives,” he says, his eyes widening. “You can’t help but catch fire when you find something unusual or novel—you just have to get excited.”Igniting a Spark
In undergraduates like Higginbotham, who completed his degree in April 2000, research ignites a spark for learning that leads them to further research and study. “I look forward to doing this kind of thing for the rest of my life,” he says.Melvin J. Carr, associate director of ORCA and coordinator of the student scholarship program, says that setting aside such a large amount of money to kindle that spark is unconventional among universities of BYU‘s size. While most other universities encourage professorial and graduate-level research, few schools target funds for undergraduates. “But it’s such an important educational element that more universities are taking notice,” says Carr. “I’ve recently been approached by people at Northeastern University, George Mason University, and New York University asking me to explain how we do things here.”Elaine Hoagland is the national executive officer of the Council on Undergraduate Research (CUR), an organization in Washington, D.C., that helps strengthen and promote research programs in predominantly undergraduate institutions. She says a scholarship program like the one BYU offers is the exception, not the rule.“I’ve worked with CUR for three years, and have been in the industry for 13,” says Hoagland, whose office serves 3,500 members representing more than 850 institutions in eight academic divisions. “And I’ve never heard of a university providing this type of scholarship. However, I know there’s a movement to try to do more of this type of thing.”And, financially speaking, it’s a movement that students appreciate. April 2000 graduate Scott L. Stephens is a former exercise physiology major from Bartlesville, Okla., and a green belt in the martial art of ryute renmei. He couldn’t have done his karate experiment, which tested the strength of two types of punches, without the university’s funding.“I was really grateful for the ORCA money. It allowed me to build all the equipment I needed for the experiment and freed up my time so I could focus on what I was trying to find out,” says Stephens, who is beginning medical school at Oklahoma State University this fall. “It paid for a really great learning experience.”As part of his experiment, Stephens invited 30 Utah Valley karate disciples from rival martial arts schools to take their best shot at a metal force plate that measured the amount of pressure applied to it. With colorful cloth belts tied around their white uniforms, subjects delivered punishing blows into the padded plate while computer sensors collected information for Stephens to analyze. The information from the “punch off” may someday be used to help people training for martial arts competitions develop better attack strategies. Stephens also sees a possible application for athletic gear manufacturers in developing better protective sparring equipment.Medical school interviewers were impressed with the fact he had done research as an undergraduate, says Stephens—so much so that they offered to pay for his PhD in biomechanical research while he earns a medical degree. “I’m really excited to be able to continue research of the martial arts when I leave BYU,” says Stephens.Funding Ideas
The big push to make undergraduate research a priority at BYU came in 1993, when Gary R. Hooper, now associate academic vice president for research and graduate studies, created the $1,000 scholarships. As a BYU undergraduate in the 1960s, Hooper was given the rare chance to conduct funded research. Upon returning to the university as an administrator, he wanted students to have a similar learning experience. Since its inception the ORCA scholarship program has funded 924 proposals, paying out close to $1 million. 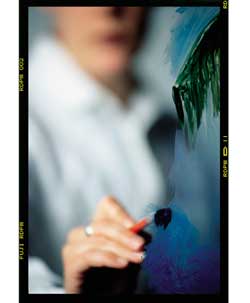 “Doing research was one of the highlights of my time at the university—it helped me see that learning isn’t just confined to the classroom,” Hooper says. “What we’ve seen over the years is that BYU students really enjoy working alongside their professors. The ORCA scholarships galvanize the administration, faculty, and students into having a learning experience with a real student focus.”To be awarded ORCA funding, students are required to counsel with a faculty advisor and write a research proposal. When submitted, this proposal is reviewed by the student’s department to determine if the pursuit is worthwhile. Some proposals receive additional review from outside their colleges before any cash is awarded. Only the best proposals receive funding, but a record number of applicants were awarded the scholarship in 1999.One such applicant is Amy R. McGlashan, an art major from Clovis, Calif., who found herself up to her elbows in watercolor paints after returning from Scotland. Her project is based on the works of Scottish poet and songwriter Robert Burns (1759–1796), whom McGlashan learned about while serving a mission for The Church of Jesus Christ of Latter-day Saints in southern England. 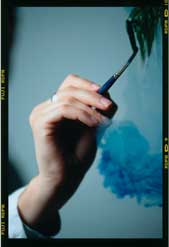 “One day my companion and I met an old English man named David Davies who sang ballads for money on the high streets of Canterbury. The songs were touching and the words were descriptive. He told me that his lyrics were originally written by the comedians and old bards of Scotland—particularly by Burns, who’s famous for his descriptions of the Scottish landscape,” she says.From her encounter with Davies, McGlashan later came up with the idea of traveling to Scotland to paint and experience firsthand the scenes that Burns described in his poetry. “The idea was to connect me to Burns’ work and allow me to personally react to it. I wanted to interpret place and content as a painter,” she says.As part of her project, she conducted a study of Burns’ writing to determine which of the sites mentioned in his poetry to visit. Then, she traveled to the selected locations to sketch, photograph, and paint. After she finishes 20 paintings, she plans to chose 10 of her best pieces for exhibition in Scotland and California. She will present the artwork accompanied by contemporary interpretations of Burns’ music. 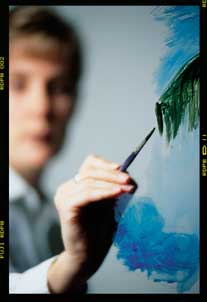 “Undergraduate research strengthens the university as a whole.”

These photographs are illustrations of research projects mentioned in the article. The people shown are models, and except for the transcranial magnetic stimulator shown in the first image, the props are not the actual objects referred to in the text.

This week the average student is about 40 years old and has paid only $29 tuition.

An Organ Just for You