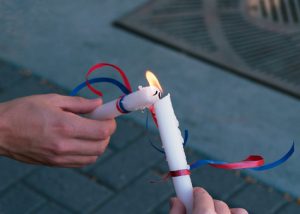 The events of Sept. 11 brought feelings of shock, grief, and patriotism to the BYU community – especially to those who witnessed them. On Sept. 14 BYU students gathered for a candlelight vigil (above).

Groundbreaking BYU research shows what it takes for a woman to truly be heard.