Time to Build a Better Marriage

Couples can strengthen their relationships with books, Web sites, and other “self-directed” approaches. 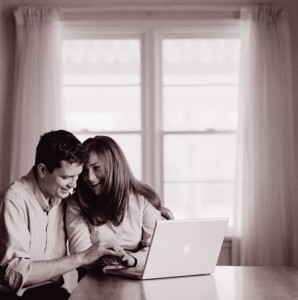 As couples read quality Web site articles together, they should stop frequently to discuss the material.

If you’ve been married more than a year or two, you’ve probably wondered about marriage seminars, workshops, retreats, and classes. It’s likely occurred to you that attending one might be a good thing for your marriage, but chances are you haven’t acted yet. So few people, in fact, take advantage of marriage enrichment, despite its demonstrated benefits, that marriage educators wring their hands over how to encourage more couples to invest some time to improve one of their most important relationships.

BYU School of Family Life professor and marriage educator Stephen F. Duncan (MS ’85) might have found a way—make it easier to access helpful information. In a study to be published this spring, Duncan reports that reading research-based Internet articles as a couple and applying the principles is as helpful as attending a seminar or workshop. “People are pressed for time and money, and this study is very hopeful in showing that couples can do something that strengthens their marriages without spending massive amounts of money or time,” Duncan says.

Researchers had already identified “self-directed” approaches such as reading books or watching DVDs as promising, but no one had studied Web site education exclusively. No one approach works for everyone, and Duncan recommends that couples customize their education. “This study is about fitting the interventions to the specific needs of a couple. Some might do great with Web articles. Some might need a lot more.”

In recent decades, researchers have completed hundreds of studies about what makes marriages strong, but not enough couples know about the results, says Duncan. Instead, too many rely on popular books that emphasize unresearched ideas.

“I’m not a Mars/Venus fan,” he says. “The premise is not based on scholarship. It suggests stereotypes and separation, which can harm relationships. I believe both men and women have the same spiritual and planetary roots.”

Research, on the other hand, can offer powerful insights, Duncan says. We now know, for example, that couples who avoid four killers of marital happiness—criticism, contempt, defensiveness, and stonewalling—are much more likely to enjoy a rewarding and lasting marriage. Another study suggests that couples are strengthened by five “magic hours” per week, including a weekly date, a stress-reducing conversation at the end of each day, and a daily act that communicates appreciation and affection.

“The findings in these studies [led by University of Washington professor John Gottman] are the result of careful observation and measurement, even measurement of physiology and biochemistry, right down to cortisone and other stress hormone levels,” says Duncan.

In his study, coauthored with BYU graduate students April Steed (BS ’03) and Carma Martino Needham (BA ’03), Duncan had one group of couples read assigned research-based marriage articles on the School of Family Life’s Forever Families Web site, which Duncan and his associates have been building since 2004. Duncan asked the couples to read the articles and complete two to three related exercises each week for six weeks. The second group attended six two-hour sessions of a traditional marriage workshop while he offered future help to the third group, the control group.

Duncan found that the first two groups consistently improved their marriages. Because the vast majority of these couples started out reasonably satisfied, Duncan can’t say for sure whether Web-based marriage education can help more seriously distressed couples. However, several couples were more distressed and they improved in a way similar to the less-distressed couples.

Working as a Team

Duncan recommends that couples who want to fortify their marriages with self-directed approaches do so together. They might read quality Web site articles or books aloud as a couple, stopping frequently to discuss the material and how it applies to them, identifying and celebrating strengths. As couples identify weak spots and ways to overcome them, they should be frank but kind. As they learn new techniques, they can adjust them to their distinctive needs.

For example, says Duncan, a couple might learn about a technique marriage educators call “speaker-listener.” Each spouse takes a turn holding the floor and a turn listening. The speaker must speak for himself or herself by using “I” statements rather than assuming anything about what the other person thinks or feels. The listener doesn’t rebut but instead communicates that he or she is listening by nodding, vocalizing, and occasionally restating.

While marriage educators might teach this technique in a specific way, Duncan says couples should take what works for them and toss the rest. “My wife and I have learned to listen respectfully when one is sharing ideas with the other. We’ve also learned to avoid the time just before dinner if we really want to listen to each other because we’re hungry. That’s not a good time for good communication for us. So we try to listen better, but we have our own style of doing that.”

The Art of Persuasion

While the ideal is to learn marriage principles as a couple, often one spouse wants to learn while the other doesn’t. “You might bring the speaker-listener skill home all by yourself and say, ‘Sweetheart, I would really like it if we could do this in our marriage.’ And your spouse might say, ‘That’s the dumbest thing I’ve ever heard. That sounds so phony,’” says Duncan.

Duncan recommends introducing ideas to a resistant spouse in a positive, upbeat, proactive way. “‘Honey, I read this and I think it’s cool. Do you mind if we take a few minutes so I can share this with you?’ You’re not implying that the other person has to buy into it, just asking that he or she consider it.”

Duncan believes the average man is typically less “relationally literate” than the average woman, so it’s more likely that a woman will be approaching her husband. Using what Gottman calls a “softened startup” rather than a “harsh startup” is critical. “She must be careful to avoid an outburst like ‘You never spend any time with me!’ or to imply that she married a jerk and she’s going to straighten him out.”

Duncan also says it’s helpful for husbands to understand that when relationships improve and wives find their emotional needs fulfilled, they tend to feel more connected to their husbands and thus more likely to want physical intimacy. “For men, if their sexual intimacy needs are met, they tend to feel more loved than if those needs are not met,” he says. “If there’s a connection and a tie to a man’s deeper needs, then men are more likely to try some of these more interpersonal things.”

Whichever spouse is initiating better relationship skills, neither should be reluctant or embarrassed to talk about what he or she needs. “They can do that without constantly complaining, without criticizing, and without being contemptuous or harsh with their beloved. They can just say, ‘I really would like this to happen.’”

However a couple chooses to improve their marriage, Duncan says the point is to avoid stagnation. Regularly pick up a new idea or two to keep your relationship fresh, says Duncan. “I believe in reading, writing, and relationships—meaning that relationship education is as fundamental as the first two and should begin very early on in the same ways we teach reading and writing. There are many places to get that education, but we all need more of it.

For those who want to freshen and strengthen their marriage, Duncan recommends the following resources:

• Take Back Your Marriage, by William J. Doherty

• The Children, Youth, and Families Education and Research Network, cyfernet.org