The World Is Our Canvas 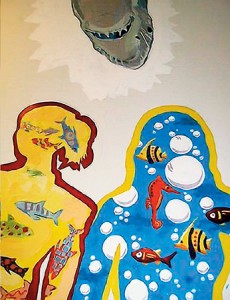 BYU artists depicted the colorful creatures of Australia and New Zealand in murals on hostel walls after the owners invited them to create an art project.

BEYOND the breaking waves of Brisbane’s coast and beneath the shadows of New Zealand’s long white cloud, 28 BYU art students began to see the world of art in a new way. While most art curricula focus on the classic roots of Europe and the Western world, visual arts professor Joseph E. Ostraff, ’82, decided to give his study abroad students a taste of Pacific Island art and culture last spring. The group spent two months traveling Australia’s eastern coast and both islands of New Zealand—capturing their experiences with art. Faculty members Brian D. Christensen, ’90, and Brian K. Wilcox, also accompanied the group. “It’s often hard to apply art within the confines of a classroom, so I’m always seeking for ways to get students out into the world,” Ostraff says. “These experiences place students in a context they’re not used to, allowing them to grow in a capacity that can’t be duplicated elsewhere.” 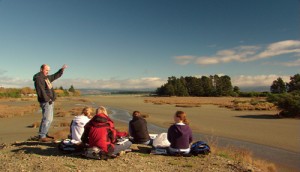 During a recent trip to New Zealand and Australia, professor Joseph Ostraff guides students as they capture a meandering river and blue sky with their brushes and canvas.

As they developed their talents, from sketching and painting to photography and carving, the students also learned from native artists. At a Maori marae, or tribal gathering place, in New Zealand, artist couple Julie and Rangi Kipa welcomed the students and eagerly shared their family, culture, passion, and art. The Kipas were touched by the students’ enthusiasm to learn about the Maori culture, in contrast to the attitude of local university students. Hostel owners and other hosts also added to the students’ understanding of “down under” art and culture by sharing native music and cuisine, giving art advice, and arranging tours.The group had an opportunity to give something back when two different hostel owners—from the Straddie Guesthouse on Australia’s North Stradbroke Island, and Footprints Backpackers, in Nelson, New Zealand—invited them to use their walls for an art project. This was not in their original curriculum, but the students saw this as a way to say thank you to a people and country they had grown to love. “It was a gift we were capable of giving to show our appreciation,” says Shauna E. Paul, ’04. The students collaborated and compromised, learning how to create art as a team. Branton J. Vest, ’03, says, “I began to trust others to produce art, something that as an artist who primarily paints on his own, I don’t do very often.” Together they created a colorful contemporary ocean scene and a patchwork design of wildlife and landscape, highlighting natural aspects of Australia and New Zealand. The art has since become a chief conversation piece. New Zealand hostel owner Christine Bensemann loves the mural and enjoys telling people about the art students from Utah. “I was so impressed by the way they all treated each other and looked after the children,” she says. “We couldn’t have had a nicer and more caring group.” Bensemann wasn’t the only one who noticed something different about the BYU students. “People told me this was one of the most clean, friendly, positive, and trouble-free groups they’ve ever noticed,” Ostraff says. As representatives of BYU abroad, the art students left behind a positive image of the university and some works of art. Mele N. Kamau’u, ’04, says, “I hope, in some small way, those murals will make a lasting impression on those who left such a lasting impression with me.”

True marriage is based on a happiness which which comes from giving, serving, sharing, sacrificing, and selflessness.

A Park for the People