The Science of Singing 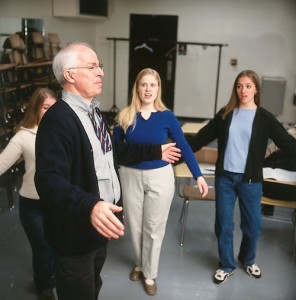 Voice professor Clayne Robison has turned to physics and group-interaction techniques to unlock the potential beauty in every solo singing voice.

A BYU music professor is applying discoveries in physics to create vocal beauty.Musically challenged of the world—pay attention.Applying ideas from modern physics, statistical analysis, and group dynamics, BYU voice professor Clayne W. Robison, ’62, is improving and then measuring the increased quality in singing voices—even among those who may not consider their voices capable of beauty.“I’m not claiming to be inventing voice teaching; there are many beautiful singers in the world and many successful voice teachers,” says Robison, a Harvard Law School graduate who joined the BYU music faculty in 1973 after getting a doctorate in musical arts from the University of Washington. “Instead, I’m drawing insights from physics to trigger the basic beauty available in everyone’s singing voice.”Robison explores this new understanding of the physics of singing in “Beautiful Singing: What It Is and How to Do It,” which recently appeared as the lead article in the Journal of Singing, and as the key chapter in his recently published book, Beautiful Singing: Mind Warp Moments.“First, the article explains what is happening when you hear a voice that makes you want to weep or stand up and cheer for sheer beauty,” says Robison. “And then it helps you see that you have these same interactive forces available in your own voice—it’s a matter of physics.”The baritone’s interest in applying science to what is normally considered an art began in the early 1990s, when he noticed that vocal science explained what was happening when sound is made, but stopped short of explaining what made certain sounds beautiful.“At that time voice scientists seemed hesitant to investigate beauty in the voice because that concept was somehow too unscientific,” says Robison.Convinced that qualified listeners would agree when singing is beautiful, Robison directed a social-science experiment in 1993 that recorded a group of classically trained baritones and a group of female pop-belt singers. A panel of internationally noted voice teachers and voice scientists and a control panel of classical-voice connoisseurs then reviewed the recordings, scoring each singer’s vocal beauty. The 13 judges were in substantial agreement on the singers’ relative beauty rankings.Returning to the recorded samples, Robison and research colleague Barry U. Bounous, ’85, also a BYU voice instructor, were then able to confirm the qualities beautiful voices have in common—continuing presence and evenness of vibrato, balance of both bright and dark resonances, and cleanness (singing that has no out-of-tune overtones).Noting also common posture and breathing patterns in the beautiful singers, Robison turned again to the evolving theories of science to understand the relevance those posture and breathing habits had in vocal beauty.“Until the last few decades, most physicists assumed a linear cause-and-effect model when describing the way the world works,” says Robison. “But now physicists are looking at the way systems interact.“In the old linear view, the voice was like squeezing the bulb on the horn of an old Model T Ford—a simple case of one cause, one effect,” says Robison. “Instead, beautiful singing should be seen more like shaking a bush—when one of the branches is moved, all the others are affected.”In practical application, voice instruction is more effective when teachers start listening and students start singing with the implications of this interactivity in mind, says Robison.“Correct posture and free breathing displacement clear to the floor of the abdomen turn out to be the foundation for full interactivity in the really beautiful voice,” says Robison. “Beautiful singing can come either from talent or from getting your body to allow these interactive physics to happen.”His own application of the principles he espouses can be heard on two recently released CDs of sacred art songs—Sabbath Song I and II.The research has also made a difference for his students. In the last five years, eight of 12 advanced students from his BYU studio have received 13 citations in the Metropolitan Opera Auditions, including seven district awards and five regional awards; one student was the Grand National winner, becoming the first BYU student or Utah resident to receive such a distinction. Three of those students have reached the finals of the San Francisco Opera auditions, six have fulfilled professional opera internships, and two have been designated singer of the year by the BYU voice faculty.Neil Semer, a New York City–based international voice teacher who trains classical and musical theater singers, says Robison’s research communicates important ideas about what takes place in beautiful singing—ideas of which teachers should take advantage.“Clayne’s work is wonderful and highlights an area of study that warrants further research,” said Semer. “His results as a voice teacher have been extremely impressive.”Jonathan S. Yarrington, ’04, a vocal-performance major from Idaho Falls, Idaho, and a current student of Robison, says understanding the science behind his voice has been particularly beneficial to him. 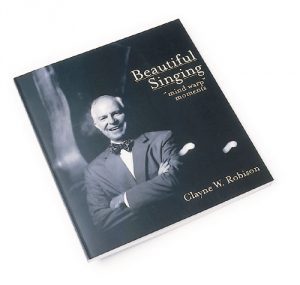 “Dr. Robison’s explanation takes the mystery out of singing for me. It helps me understand, to better visualize, what is going on in my body when I’m singing,” he says. “Understanding the physics of singing gets me out of the mind-set of focusing on one element of my voice at a time and helps me take a more holistic approach.”Ingo Titze, distinguished professor of speech science and voice at the University of Iowa and director of the National Center for Voice and Speech, agrees that the insights from Robison’s article are a valuable contribution to vocal instruction.“Clayne Robison is impassioned by this venture of sorting out the interactions. So am I,” says Titze.Along with his studies of vocal physics to improve singing, Robison has also experimented with group-interaction techniques to improve teaching. He has developedBYU‘s “Vocal Beauty Boot Camp,” a program that teaches basics vocal technique. In the camp 15 to 20 students learn from instructors and each other in a group setting.Using statistical sampling to measure the change in beauty in students’ singing from semester to semester, faculty are able to show that students involved in the group boot camp demonstrate more than three times the vocal progress of those students at the same level who are taught privately.“There is a multiplying effect here—boot camp instructors can be four to five times more efficient and three times more effective than they would be teaching the same students in traditional one-on-one instruction,” says Robison. “They are improving the use of their time more than tenfold.”Robison hopes that his work will encourage those who want to sing more beautifully.“With supervision from someone who understands the physics and who can help your body find it, coupled with sufficient desire, time, listening, and practice, anyone can master the physics, add the emotion, and sing beautifully enough that listeners will say to themselves, ‘That’s pretty. I’d enjoy hearing her sing again.'”

Grant Madsen is the features editor for BYU University Communications.web: To find out more about Robison’s studies of beautiful singing or to download a 35-minute video showing the results of a vocal beauty “boot camp,” visitbeautifulsinging.com.

They That Wait Upon The Lord

Waiting upon the Lord, even through uncertainty, will bring forth promised blessings.

To Behold and Be Held

BYU students flocked to the Harold B. Lee Library for the chance to hold a first-edition copy of the Book of Mormon.