The Power of Music

After performing a trumpet solo at a BYU freshman assembly in 1940, sophomore Jack L. Tueller (’42) returned to the band room. “A young lady asked me if I was the soloist,” Tueller recalls. “I said yes. She continued, ‘You have strong lips.’ I asked her if she would like to find out—I got a nod in the affirmative and went over and kissed her!” He later learned that the young woman—Marjorie Rogers (’43)—also played trumpet in the band. They soon dated and later married. 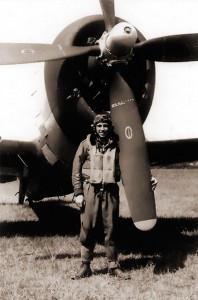 Jack Tueller left school to join the war effort, where he flew the P-47 Thunderbolt.

The trumpet has played a significant role throughout Tueller’s life. His mother died at age 28, and his father left—never to return—the day after her funeral. Jack, then 6 years old, and his younger brother were taken in by his aunt. To tame a boy with boundless energy, his aunt suggested he learn to play the trumpet. “I discovered I had a talent of learning music by ear,” Tueller says. He practiced constantly, without formal training. His perseverance paid off: he won a state solo contest in high school and later became first chair in the BYU band.

A turning point in Tueller’s life came when his trumpet was stolen while he was a student at BYU. “I purchased a new one, but it set me back financially,” Tueller says. Making just 25 cents an hour as a custodian at the BYU Women’s Gym, he found himself without enough money for tuition. He decided to join the military for money and to pursue another interest—flying.

Toting his trumpet, Tueller enlisted in the U.S. Army Air Corps. Too young to be a pilot, he first was trained as a radio operator and was assigned to a B-25 bomber. He later joined the flying cadets, where he earned his wings.

In June 1943 he entered World War II with orders to go to England and prepare for the invasion of France. He was assigned a new P-47 Thunderbolt, a fighter plane in which he would amass some 2,000 hours of flying.

The trumpet he had purchased as a BYU student accompanied him on every combat mission in a canvas bag tied to his parachute. “I figured if I got shot down I could use it at the prisoner of war camp to get an extra bar of soap from the guard,” Tueller quips. 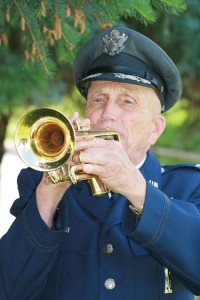 The trumpet has been Jack Tueller’s lifelong companion. It gave him direction as a youth, helped him meet his wife, and was at his side throughout Wold War II.

Soon after the D-Day invasion, the Allies established a beachhead in France and began building an airstrip at Omaha Beach. During construction German snipers had killed several workers. “The airstrip lacked facilities, so we slept under our airplane wings,” Tueller says. Needing to relieve some stress, he reached for his horn. “My commander told me not to play because it would attract the sniper’s attention. I ignored his warning and played anyway. I thought, ‘Maybe the German didn’t want to be here, either.’ I decided on ‘Lili Marleen,’ a German love song.” The sniper’s gun silenced.

The next morning, military police told Tueller a prisoner had inquired about who was
playing a trumpet. “I grabbed my horn, jumped in the jeep, and went with the police to the prisoner area. When the German soldier saw me, he burst into tears and said, ‘I could not fire. I was thinking of my fiancÃ©e and family.’ He stuck out his hand, and I shook it,” Tueller remembers. “The power of music.”

After the war, Tueller became a squadron commander and then an aerial observer. He was involved with the U.S. Air Force’s missile and space program. After 25 years he resigned from the military. As a civilian he was a vice president for a company that built nuclear power plants and was involved in creating BYU’s ROTC program.

Tueller resides in Bountiful, Utah, with his wife, and they have six children. At 88, he continues to use his strong lips to lift the spirits of his family and others on his 60-year-old trumpet.

The Instrument of Her Success

For Carianne Bacon, life is simply a series of mini-miracles that lead her to where she needs to be.

With funding from NASA, BYU researchers work to find out what it takes to kill bacterial hitchhikers.

Going Forth: City of Storms

Paul Solouki’s love of service powers him through heat and mess while he cleans up after New Orleans’s latest hurricane.