The Instrument of Her Success

For Carianne Bacon, life is simply a series of mini-miracles that lead her to where she needs to be. 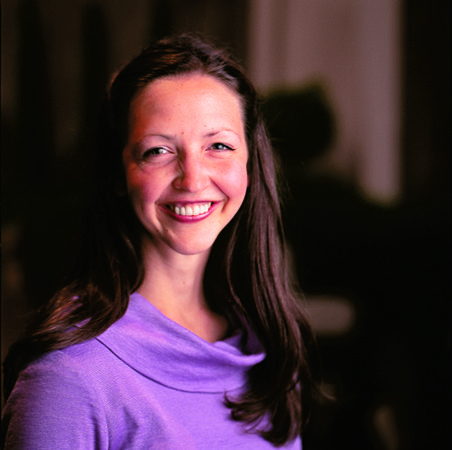 Just outside the HFAC, the tone of a high d-flat reverberated through the campus air and circled around passing students. The “instrument”—singer Carianne Bacon (BA ’03)—was practicing hitting the note in preparation for an upcoming performance. “One of my teachers would make me go outside and sing this note,” says the soprano. “I tried not to look at the people walking by because I would blush.”Bacon never pictured herself singing a high d-flat to fellow students. Nor did she see herself majoring in music, or working toward a master’s in marriage, family, and human development. But she did it all, claiming that any success she’s had has been part of a series of miraculous events.Though Bacon is a self-described black sheep among a family full of musical virtuosity, she learned to sing from her mother, who taught voice lessons in their home. With the opportunities her mother and father provided, Bacon began down a path of her own musical talent.During her senior year of high school, Bacon sang Puccini’s “Quando Me’n Vo” with orchestral accompaniment before a large crowd at the school’s yearly concerto aria night. “I remember getting so much positive feedback,” Bacon recalls. The feedback proved to be a turning point for Bacon. “That was the first time I thought, ‘Maybe I could do something with this,'” she says.Bacon, who opted not to audition for BYU‘s music program the February before her freshman year, ended up trying out the week before school began. “I thought, ‘Why not?'” she says. “I was accepted, which was a miracle.” Bacon still didn’t see herself as a music major. “I just thought I’d take a few music classes,” she says.Bacon worked with her voice during what she calls two very hard and humbling years in the music department. “My voice was just average,” she says. “It was hard for me to be at the bottom of a barrel of so much talent.” But after leaving to serve in the Ukraine Donetsk Mission in 1999, Bacon returned in 2001 with a different outlook and a different voice. “My voice had matured somehow,” Bacon says, “and I stopped worrying about the competition and started enjoying it. I saw all these people around me that were better than I was, and I learned to love them past the voice and past the music. That’s when the miracles started happening.”A few months after her return, Bacon was cast as Lauretta in BYU‘s 2002 production of Puccini’sGianni Schicchi. “I remember looking at the casting list and seeing my name there,” Bacon recalls. “The thought that immediately came to me was, ‘This is because of your mission.'”

“I learned to love them past the voice and past the music. That’s when the miracles started happening.” – Carianne Bacon

Music provided unexpected experiences and growth, but Bacon considers it a stepping stone to finding her true passion—family relationships. While preparing for Gianni Schicchi, Bacon signed up forMFHD 301—a marriage-prep class, which she never thought she’d take. “It was such a BYU cliché, but two of my friends told me I needed to take this class,” Bacon says. Through the class’s discussions and materials, she became fascinated with family relationships. “A light clicked on,” says Bacon, who applied for and was accepted into the marriage, family, and human development graduate program.Now awaiting her August graduation, Bacon claims, “I’m not different from anyone else.” But the events that have led her to this point have—in her eyes—been miraculous and have taught her one thing: “What I want more than anything is to be with my family forever,” she states. “That has changed my perspective. I feel that if I read the scriptures, pray, and have good interactions with my family, I’ve had a good day.”

The Anniversary of the Czech “Velvet” Revolution

The major problems facing his country were not economic transformation or organized crime...

A Room Without A View

With rare exception, we tend to disparage what is below us.

A Force for Good: Alison Davis-Blake

The dean of the School of Business at the University of Michigan knows what is required to be a force for good.