The Next Step in Van Noy’s Journey

By Jeff Benedict in the Summer 2014 Issue

By Jeff BenedictLearning from the past and looking toward the future, a Cougar standout joins the NFL.

BYU linebacker Kyle Van Noy (BA ’13) was at home with his family in Utah when his cell phone began vibrating on the afternoon of May 9. Detroit Lions head coach Jim Caldwell and general manager Martin Mayhew were on the line. “You’re my guy,” Caldwell told Van Noy.

“I just want to thank Coach Caldwell and Mr. Mayhew and the Ford family for believing in me and wanting me as a part of their organization,” Van Noy began, smiling. “It’s an honor to be a Detroit Lion.”

Those were not idle words. Playing in the NFL has been Van Noy’s lifelong dream. But there is one thing Van Noy has always wanted more—to be believed in, to be wanted. Those themes run deep with him.

When Kyle was born in Las Vegas in 1991, his biological mother placed him for adoption with LDS Family Services. She wasn’t LDS, but she wanted her baby raised in an LDS home. She got her wish. Layne and Kelly Van Noy were living in California when they adopted Kyle. They immediately recognized that he had an indomitable spirit.

The braces eventually came off and the family relocated to Reno, where his parents began encouraging Kyle’s athletic ambitions. Kyle excelled in a flag football league for 8-year-olds. He was only 5. 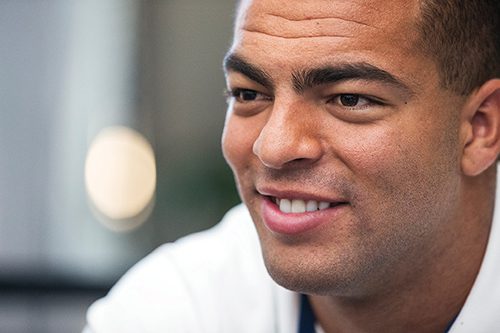 A Detroit Lions NFL draft pick, Kyle Van Noy has made the most of a second chance. Photo by Mark Philbrick

By his junior year at Reno’s McQueen High, more than 20 top football programs had approached Kyle, including LSU, Nebraska, Oregon, and UCLA. BYU was among the schools recruiting Van Noy, but he had no interest in playing for his faith’s flagship school.

That changed on April 29, 2008, when BYU football coach Bronco Mendenhall spoke at a youth fireside in Reno. “I didn’t want to be there that night,” says Van Noy, who sat in the last row. “My parents made me go. I figured it was going to be another talk about church stuff.”

Mendenhall was drawn to Van Noy because he was the only kid not wearing a white shirt and tie. When the coach made eye contact, Van Noy returned his gaze with a skeptical, hard stare. Mendenhall called an audible, redirecting his remarks to an audience of one. He spoke about geese flying in V formation, taking turns at the point and never abandoning a member of the flock. Van Noy was riveted.

“He taught us that if one goose fell off and was unable to fly, another goose would wait with him until he either died or was able to rejoin the group,” Van Noy recalls. “At that time I felt so alone. And it felt like he was talking directly to me. I had never heard a football coach talk like that.”

A friendship was struck. During a subsequent recruiting visit, Van Noy opened up to Mendenhall. “He didn’t hide anything,” Mendenhall says. “He was sincere and truthful. He just said, ‘I’ve done this. I’ve done this. I struggle with that.’ He was very blunt.”

In all his years of coaching, Mendenhall couldn’t recall such candor in a student-athlete. The point was reinforced when Van Noy got in trouble with the law in Reno just weeks after accepting a scholarship to play for BYU. Due to Van Noy’s juvenile status at the time of his arrest, the incident went unreported. No one at BYU was aware of it until Van Noy flew to Utah specifically to tell his coach.

Surprised to see Van Noy in his office doorway, Mendenhall knew there was trouble when he saw tears in Van Noy’s eyes. “Let me help you,” Mendenhall told him.

Biting his lip and looking away, Van Noy was convinced his mistake would cost him his scholarship. Still, he told his coach about his run-in with the law following a late-night party back home. To his surprise, Mendenhall rose, put his arms around him, and told him he loved him. 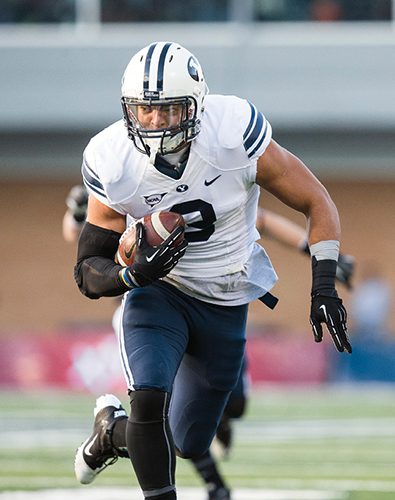 Van Noy surprised everyone when he opted not to enter the NFL Draft in 2013. Instead, he returned to BYU for his senior year. Photo by Jaren Wilkey

Van Noy made good on that acceptance. Working with Mendenhall and the university, he agreed to a one-year probation and joined the Cougars for his first summer camp in 2010. He earned a starting position by midway through his freshman year. He became a model student. And by his junior year he had emerged as one of the top linebackers in the nation. He capped off his junior season with a record-setting performance in the 2012 Poinsettia Bowl, where he was named the game’s MVP after scoring two touchdowns in less than seven minutes.

But Van Noy surprised everyone—including Mendenhall—when he opted not to enter the NFL Draft in 2013. Instead, he returned to BYU for his senior year. He returned out of a sense of duty. “Especially with my past, staying will have an impact on a lot of younger people,” Van Noy says. “There will be kids who say, ‘If Kyle can graduate, then I can too.’”

Van Noy graduated with a degree in history in December 2013. He also got engaged to Marissa Powell, the former Miss Utah who has been his best friend throughout his time at BYU (the two married in June). He leaves BYU as one of the best defensive players in the school’s history.

By joining the Lions, Van Noy reunites with another one of his best friends—former BYU teammate Ezekiel “Ziggy” Ansah (BS ’13), who was the Lions’ first-round draft choice one year earlier.

Van Noy mentored Ansah when he walked on the BYU team as a statistics major from Ghana in 2010. They became roommates, and Van Noy taught him everything from how to hit to how to train. The day after Van Noy met the Lions’ media, he attended church with Ansah in Plymouth, Mich., where Ansah introduced him to the ward as “my brother from another mother.”

“He’s been such a great friend,” Van Noy said at his Lions introductory press conference. “I couldn’t ask for a better role model since I’m not role modeling him anymore. . . . I’m excited to be a part of the Detroit Lions.”

Jeff Benedict is a special features writer for Sports Illustrated and the author of 12 books. His latest book—The System: The Glory and Scandal of Big-Time College Football—includes sections on the college careers of Kyle Van Noy and Ezekiel “Ziggy” Ansah.

Whatever the future brings, Pili is grateful for the discipline he learned from football.

Voice of the Cougars

BYU is the first college football program in the country with the same cutting-edge WiFi used in many NFL stadiums.