Elizabeth Allen Wiseman (BS ’86, MOB ’88) is making banana bread. The dough is in the pan and already into the oven when she realizes she forgot the baking powder. Her teenage daughter comes into the kitchen to find Wiseman mixing in the last ingredient in the pan.

“Well,” Wiseman replies, “it’s a bit of a science experiment. We’ll find out.”

This mother of four, who was named in both the Thinkers50 list and Fortune’s most-powerful-women network, is also the founder of an executive-coaching firm and the author of the bestselling book Multipliers and a new book, Rookie Smarts. Instead of trying to keep work and family life separate, Wiseman says she “mash[es] ’em together.” 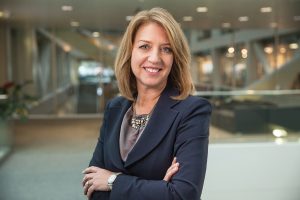 Liz Wiseman’s leadership insights have made her a bestselling author and an executive-coaching powerhouse.
Photo by Becky Leung.

The business world knows Wiseman best for her work with the concept of multipliers. While she was working as an executive at tech firm Oracle, Wiseman started to notice how some leaders make those around them flourish by demanding all of the intelligence and skills of those they lead. She labeled these leaders “multipliers.” On the flip side are “diminishers,” who, sometimes even with the best intentions, have a stifling impact on those around them.

Multipliers and diminishers exist outside of the work environment as well. One “accidental diminisher” tendency Wiseman has noticed is especially prevalent in families and communities. “Good-hearted people typically don’t like people to struggle or suffer or make mistakes or fail. When we see people struggling, we jump in and we help,” she explains. But she advises against stepping in when someone is “on the brink of doing a hard piece of work . . . because it is in the struggle that people grow.”

Wiseman’s Rookie Smarts is a continuation of her research on leadership in the workplace. This time, she looks at how experience on the job can actually be a disadvantage. In fact, she notes that individuals who are new in a job—be they young or old—often outperform their experienced coworkers. Wiseman suggests that when new employees don’t exactly know what to do, they are more likely to pay careful attention, seek out guidance, test ideas, and move fast. “Rookies are quite literally ‘anxiously engaged,’” she says.

Wiseman’s research has been applied to companies like Nike and Apple, but she proudly admits that she has learned the most about leadership from her children. “Leading in our homes is the purest form of leadership,” she says. “We don’t hire our children, we can’t fire them, . . . and your kids don’t really get to fire you either. . . . It forces you to really learn good, righteous leadership.”

Leading both in the workplace and at home requires some juggling, Wiseman acknowledges, and she is quick to point out that she doesn’t hold herself up as a model. “It’s dangerous to try to emulate other people in your career choice,” she says, adding that family and career decisions are personal. “It’s a decision between you and the Lord, and you and your spouse.”

Instead of trying to keep work and family life separate, Wiseman says she “mash[es] ’em together.”

Wiseman has found a balance that works well for her family. As president of the Wiseman Group, she travels around the world to speak and give workshops, but she and her husband, Larry T. Wiseman (BS ’87), run their company from home, leaving her time to spend with her family and bake the occasional loaf of banana bread.

As for the experiment, the banana bread turned out tasty enough for her Scout troop members, who had fun guessing the secret, almost-forgotten ingredient.

A Step Up for Stepfamilies

BYU student’s journey after being kicked by horse, a month-long coma, and a fight to return to normal life.

From Walk-On to All-Star

He’d never played on a team before BYU. Now he’s shirting up for Team USA.