The Lava Hunters of Mount Kilauea 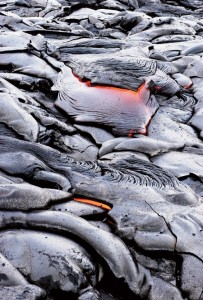 It’s 3:30 a.m., and wind howls through the lush foliage surrounding the Volcano House Hotel.Comfortable in his bed, BYU geology professor Jeffrey D. Keith, ’77, awakens to the sound of possibility—a pause in the persistent rain that has prevented him and his students from finding and collecting fresh lava samples from Hawaii Volcanoes National Park.Yesterday’s attempt was hampered by inclement weather, which produced so much steam that it was impossible to locate newborn rock. Worried about the possibility of the trip being a bust, Keith climbs out of his warm bed and into wet hiking boots. Careful not to wake his wife, he slips from the room and descends to the dark parking lot. As his students sleep, Keith drives a rental car 20 minutes down a twisting road to the lava fields—a craggy and alien landscape straight out of a science-fiction film.Made of barren, glass-crusted rock that crunches and crackles underfoot, the extensive lava fields are the product of Mount Kilauea, one of the world’s most active volcanoes. 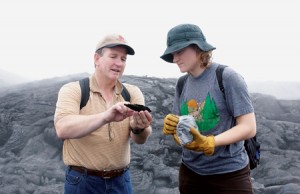 Professor Keith discusses a rock sample with Stpephanie E. Ashley, ’05. Students collected samples from the lava fields as part of keith’s research aimed at understanding the formation of copper, silver, and gold deposits.

Standing on the fields’ edge, Keith spots the eerie red glow of active lava reflecting off thick cloud cover miles in the distance. He aligns the exact spot with the edge of a nearby U.S. Forest Service storage shed. Keith marks the dirt next to the paved road and makes the trip back to the comfort of his hotel room.Over the course of his 12 years of research and teaching at BYU, Keith has brought more than 100 students, faculty, and alumni to examine lava flows and to sizzle the soles of their shoes on Hawaii’s lava fields. Here Keith conducts research and helps students do the same, all the while enhancing their educational experience.“Students have seen pictures of lava flows in textbooks,” says Keith, who has published 17 scholarly papers about volcanic activity and ore deposits. “But it’s an entirely different experience to come here and see them being formed, to walk up close enough that they can feel the heat and see how those individual forms are made and how fast they move. I think that they’ll never look at things the same way again.”But finding lava isn’t as easy as it sounds. In fact, yesterday it was impossible.DAY 1: A RAIN-DRENCHED EXPEDITIONRain hammered the group’s will on the first day of lava hunting. Ponchos failed and water dripped from hair and noses. Humidity and thick steam added to the general discomfort, as did the incessant rising and falling of their path over the black, rocky terrain.Despite the physical challenges, not one of the students complained. They love the lava fields for what they are—a geologist’s paradise.“This place is unbelievable,” said Matthew P. Harper, ’01, from Blackfoot, Idaho, who came on the trip to study mafic magmas related to his master’s thesis research. “There is so much to see here, so much to learn about.”Like Keith, Harper is researching the processes of ore formation, particularly those that happen deep beneath the earth’s surface in certain kinds of magma chambers.

The lava fields contain varied designs of natural artwork. While some sections of the fields are smooth and rounded, others are textured with ropy, intricate folds of rock.

Buoyed by their enthusiasm for geology, the group members methodically made their way toward what Keith called a “shatter ring,” a geologic formation that recently appeared in the park. As they hiked, Keith pointed out occasional wisps of blue sulfur smoke produced by an active river of lava just a few feet below the crust, inevitably followed by the smell of rotten eggs.When they arrived at the shatter ring, the rain stopped as if on cue. Keith explained that the doughnut-shaped formation of rocks stacked about 20 feet tall mysteriously appeared in the park. Geologists hypothesize that, much like an angry boil, pressure increased in an underground river of lava until small explosions cast the sharp-edged rocks into their circular shape.“It was several big hiccups,” said Keith. 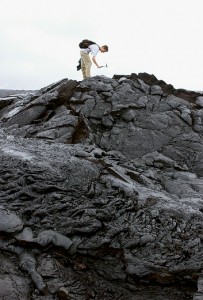 After lunch, the group tried to find the elusive lava flows. The rain held for a while, but the search did not become easier. Keith wandered off by himself through blankets of steam, eyes focused on the ground as he searched for an opening in the underground lava tubes. Soon, he called the group together and suggested they hike to the coast to see a lava tube that delivers red-hot magma into the ocean.At the coast, the group stood on a cliff, looking down at the point of entry 100 feet below. Keith warned the students not to get too close to the edge.“Theoretically, this whole piece of land could fall into the ocean,” he said impishly. Some of the students looked wide-eyed at each other. “But the chances of it happening today are small.”No lava was actually visible. The tube delivers its payload under water, providing evidence of its existence in the form of an impressive, billowing plume of steam rising from the surface.In the middle of Keith’s impromptu lecture on the process, the rain returned in spades.Any drying that took place during the lunchtime reprieve was immediately reversed. The group huddled together, waiting, perhaps praying, for another break in the weather. Instead, the rain’s intensity increased exponentially. Sheets of water, blown sideways by the wind, hurled through the air.Finally, Keith suggested abandoning the day’s quest and returning to the lodge. 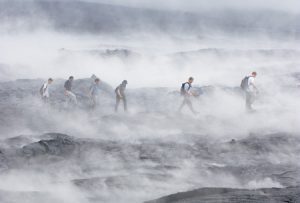 BYU geology students trek through misty lava fields. Steam produced by rain on the fields made it impossible for the group to locate active lava flows during their first day’s seach.

LIVING LAVA RESEARCHThe expedition, coming on the heels of Thanksgiving break, included a mix of undergraduate and graduate students—nine in all—seeking information particularly valuable to mining companies, like Kennecott Utah Copper, which regularly profit from the volcanic activity of eons past.“If we can understand the processes involved in the formation of these metal ore deposits, we can come up with better and more efficient means of exploration,” says Keith, who published a scholarly article on the topic early this year in the geology journal Mineralium Deposita.In his research, funded by the National Science Foundation, Keith hypothesizes that sulfur and chlorine gases at the base of magma chambers rise to the surface of the magma, capturing and pooling metal as they go. Eventually, the ore and magma cool, awaiting discovery by the mining industry. 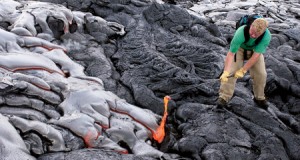 “The copper and gold deposits of Bingham Canyon (southwest of Salt Lake City) probably formed this way,” says Keith, explaining that mining companies exploring for copper, gold, and silver might be better off looking for evidence of iron-, sulfur-, and chlorine-rich magmas, as these could mark the areas where ore deposits might be formed. By sampling and analyzing fresh lava in the laboratory, he hopes to find further evidence of these gases on the surface of lava to support his hypothesis.Donald A. Swanson, scientist-in-charge of the Hawaiian Volcano Observatory for the U.S. Geological Survey, says Keith is on the right track.“This is the first time that these sorts of observations have been made, and they are very intriguing,” says Swanson. “There’s quite a lot of sulfur in the lava from Kilauea, and there is some chlorine, too. Both are soluble in water, so it’s necessary to gather the samples before they are rained on. Because we have fresh lava flows, this is certainly the right place to gather the kind of samples Dr. Keith needs for his research.”LAVA HUNTING—TAKE TWOThe morning following Keith’s late-night excursion, students convene in the hotel’s cozy lobby wearing jackets still wet from the day before. A fire in the fireplace warms the uncharacteristically chill morning and helps a few students dry socks and boots.Keith has not entered the lobby yet, and there is talk of whether or not the group will try to find active flows today. Despite the fact that the rain has commenced again, most in the group favor another attempt.“We came here to find lava, and even though the weather isn’t going to cooperate we might as well try,” says graduate student William B. Harris, ’88. “It’s not like our clothes aren’t already wet.”Keith arrives. Walking to the fireplace, he grabs a long, iron poker. Leaning against it, he tells the group about his nocturnal solo trip to the lava fields. The students, somewhat solemn to this point, are heartened by the news. Keith is confident that lava is in everyone’s future. 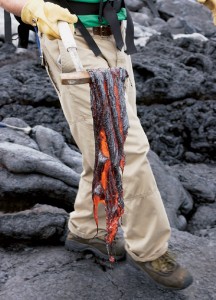 Still-glowing lava retrieved from a nearby flow begins to take on a charcoal-like hue as it cools.

For 100 years, the university’s massive middle initial has provided a symbol and a destination for students.

To the Mountains We Go

In his inaugural address, President Kevin J Worthen articulates an upward climb both challenging and exhilarating.