The Last of the First

Beckham is the last living bishop of the original 12. On Aug. 21 about 50 of Beckham’s former ward members gathered from as far away as Florida to honor him with a reunion. 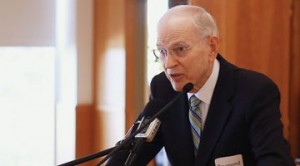 One evening in 1956, Raymond E. Beckham (BS ’49) was invited to a meeting in BYU’s McKay Building. At the meeting, he found a couple dozen men—including two Apostles, Elders Henry D. Moyle and Adam S. Bennion, who had come to organize the first BYU wards and stake.

“We sat there for a long time without anyone saying anything,” Beckham recalls, “but eventually 12 of us were excused and sent to another room. When we returned we found that the other persons were now either in a stake presidency or high council and we were bishops.”

Beckham is the last living bishop of the original 12. On Aug. 21 about 50 of Beckham’s former ward members gathered from as far away as Florida to honor him with a reunion.

Margy Potter (BS ’87) of Salt Lake City, also remembered Beckham’s generosity. After her mission, Potter told Beckham of her desire to get an education. “But I didn’t have the tuition,” she says. “He loaned me enough money to attend school, which was wonderful. I paid him back and eventually got my master’s in educational psychology.”

Beckham says those years were a time of experimentation in figuring out what a student ward should look like. At first they didn’t have Relief Society, but over time they not only added Relief Society and but also created family home evening groups.

Beckham was the bishop of the BYU Ninth Ward for seven and a half years. “It was a great experience,” he says, “and it’s a little sad that I’m the last one standing.”