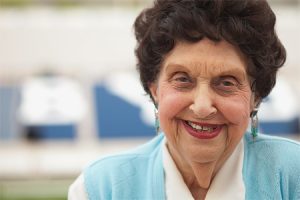 After learning to knit during WWII, Muriel Thole has been clicking her needles at BYU sports events for more than 55 years.

Muriel Thole (’58) grew up in the British Isles during World War II, when food, clothing, and entertainment were heavily rationed.

“It was frigid, and we only had 20 clothing coupons a year,” she says. “If you bought a coat, you needed 18 coupons. My mother felt sorry for me but was also a little critical because knitting could help us. She told me she was ashamed to think she had raised a daughter who could not knit.”

So Thole asked for yarn, which was not rationed. “I tried to follow a pattern, stayed up all night, and ended up with a single glove. One finger was several inches long and another was very short. I put it in the garbage, but I persisted. I taught myself how to knit and never looked back.”

It is unlikely the teenager suspected knitting would lead to BYU fame and glory, but she became a well-known figure at sports events for several decades. Her needles and yarn accompanied her to her first game, and they remain a constant companion. “I love the Cougars,” she explains, “but think I should do something while watching the team.”

A native of Wales, Thole knew nothing about basketball when she moved to Utah in 1954 after joining the Church. Among her first acquaintances was legendary coach Stan Watts, who taught her about basketball. Thole began a lifelong love for the sport. Her fascination with Cougar sports soon extended to football, and she attended every home game for both sports for the next 56 years.

As a donor for the building of the Marriott Center, Thole had her choice of chairs when it opened in 1971. She selected the seat right behind the university president. Her chair, along with her knitting and a signature bouffant hairdo, made her easy to locate.

Until the NCAA changed its gift policy, the players and  their families were benefactors of Thole’s scarves, caps, and gloves. Now a representative from United Way picks up her weekly knitting projects and distributes them to nine different agencies.

“It’s my way of doing service,” she explains, “and it makes me feel useful.”

“There is nobody quite like [Muriel Thole],” says Michael W. Middleton (BA ’91), executive director of the Cougar Club. “She has been in Cougar Club leadership for a long time. . . . You know when a game is particularly tense because she begins to knit furiously. She has accompanied the team for decades, and in many places, people recognize her.”

For example, she traveled with the basketball team to Australia. As she sauntered down a Sydney street, a man approached her and said, “Pardon me, miss, but aren’t you the knitting lady?” He had watched a basketball game while visiting his son in Provo and had seen her on television.

Thole supported her knitting habit through 36 years of BYU employment as a head cashier and through the generosity of others who have donated yarn and needles.

But as the 2011 basketball season began, Thole was nowhere to be seen. She has battled back problems and arthritis for several years, and the pain and her difficulty walking have made it impossible for her to attend games.

With the money she previously used for tickets, Thole has purchased cable television and watches the games from home. And she knits. “My hands are absolutely perfect,” she says. “My doctor believes it is because they get exercised so many hours every day.”

“Muriel is one of BYU’s greatest fans,” says basketball coach Dave Rose. “She has traveled all over the world watching and supporting our teams. We all miss seeing her in the stands and want to wish her the best.”

As emeriti president, Paine will oversee communication and activities for the program.

Alumna Sandra Turley has released a tribute album of her Broadway favorites, on Shadow Mountain Records.