The Hazards of Helicopter Parenting

To take flight on their own, young adults need a little air space.

When Andrea Marziano Warner (’86) first started catering to her second child, Julianna, she didn’t have an inkling that she was becoming a helicopter parent. Her daughter needed more help staying on track than did Andrea’s son, plus Julianna was younger and seemed more vulnerable than her brother when Andrea was divorced and then remarried.

“It took a while for me to realize that I would do things for her that I didn’t even think about doing for my son,” says Andrea, “like checking to make sure she had her lunch before leaving for school and helping with homework that she could have done herself. I babied her, and I carried her more than she needed.” 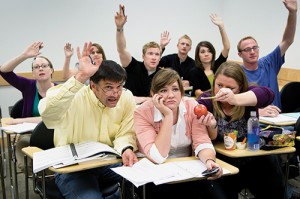 This hovering may have contributed to Julianna having trouble developing self-reliance and regulating her behavior as she got older. When Andrea recognized her part in the problem, she got counseling and learned better ways to guide her daughter. “She’s now a stand-up adult. She honors her commitments and is responsible,” says Andrea.

A recent study from BYU family life professors Laura Padilla Walker and Larry J. Nelson (BS ’94, MS ’96) identifies “helicopter parenting” as a form of parental control that can contribute to young adults taking longer to become independent. “Hovering was not associated with highly negative outcomes such as drinking and drug use,” says Walker. “However, our study and a few others suggest that hovering may contribute to a ‘failure to launch’ syndrome and potentially discourages college-aged children from becoming autonomous.”

Hovering—the Good and the Bad

“Helicopter parenting” is the term used frequently in the media to describe a form of hyper-parenting that can promote dependency in children, who then may become under-functioning adults. Walker and Nelson wanted to find out if the concept was simply media hype or a bona fide form of parental control that could be scientifically distinguished from two other controlling parenting strategies that other researchers are studying —“psychological control” and “behavioral control.” The new study investigated college-aged students and found that “helicopter parenting is, indeed, measurable and distinct from both behavioral and psychological control. So it is not just a media phenomenon,” says Walker.

The good news is that helicopter parents’ behavior appears to stem from deep concern for their emerging adult children. That distinguishes them from psychologically and behaviorally controlling parents, who are often more cold and less caring. Walker and Nelson write in their article in the Journal of Adolescence: “Children of helicopter parents appeared to see their parents in terms of a relationship high in guidance, involvement, and emotional support but likewise acknowledged a lack of autonomy being granted them by their parents. . . . Helicopter parenting appears to be inappropriately intrusive and managing, but done out of strong parental concern for the well-being and success of the child.”

The bad news is that, despite the benevolent motives of hovering, it can be as harmful as psychological and behavioral control. “If parents repeatedly make decisions and solve problems (with roommates, employers, professors) for their children,” write the authors, “it would limit the children’s opportunities to practice the skills needed to flourish in emerging adulthood, successfully take on adult roles, and in general, become a self-reliant individual.”

How Does Hovering Start and How Can It Stop?

Parents don’t suddenly become hoverers when their children leave home for college or other pursuits. They likely were heli-parenting long before that stage. The Walker-Nelson study did not explore why parents adopt this intrusive style of parenting, but they speculate it might be driven partly by parents’ concern for their own image—“how their children’s behavior will reflect on them.” Or, as children leave home, parents might hover out of “parental separation anxiety.” More research is needed to tease out why helicopter parenting develops, say Walker and Nelson.

Walker understands the temptation to hover. She’s been able to recognize her own tendency in that direction with her tween with special needs. “It is hard not to hover because I just want him to be safe, but I try to be very aware of my behavior and stop myself if I’m being overbearing. The hard part is that he’d love for me to make all his decisions for him, so I have to regulate myself and him.”

Unfortunately, says Walker, few hovering parents seem willing to take an honest look at themselves, pull back, and grant more autonomy. “It’s my opinion that few helicopter parents admit to being such,” says Walker, “and most of them defend their behavior quite vehemently. Part of this might be because not all helicoptering is unwanted. In fact, I think many college students ask their parents for a great deal of help and assistance and, in some cases, too much.”

To reduce hovering over children of any age, Walker says “recognizing one’s tendency to hover is a good first step.” She suggests parents gently encourage their kids to make independent decisions a little at a time. It’s not a good idea to “thrust them into situations where they are not comfortable,” she says, but rather to grant more autonomy in increments.

When Jamie, the oldest daughter of Karen Stone McCandless (BS ’86) and Donald E. McCandless (BA ’85, JD ’88), first left home for college, they had long discussions about how to support her. She lived 15 minutes from their home and 5 minutes from Don’s office, so they were especially concerned that the geographical proximity would make it too easy to keep on parenting as though Jamie still lived at home.

“Don and I had lots of discussions about what our involvement should be,” says Karen. “The parent part of one’s self wants to help out in many ways, from ‘I want to visit with professors and give feedback from my perspective’ to ‘I want to go in and fix roommate and employment issues.’”

They decided to resist those impulses and came up with the term “safety-net parenting” to guide how they wanted to parent during this new phase of their daughter’s life. They would let Jamie solve her own school and roommate problems and search for her own jobs. They would remain available for problems like a car breakdown, an accident, or severe illness. “I think it gave Jamie comfort to know we trusted her to live and learn from her life, but we were there in case of emergency. Jamie wanted us to make some decisions for her that she should make for herself, and it would frustrate her when we would say, ‘We can give you the pros and cons, but ultimately, the decision is up to you.’”

The McCandless’ approach seems to work, as evidenced by an essay Jamie wrote last year for a class. She titled it “Strong Girl, Raised” and describes what her parents did—and didn’t do—that helped her become a strong young woman.

“We were not helicopters but rather safety nets,” says Karen. “I believe there is a huge difference.”4

If you’re making too many decisions for your children, solving problems for them that they could solve themselves, and generally swooping in for the rescue, here are ways you can diminish your hovering:

• Let go of the belief that you can or should prevent your child from experiencing pain and suffering.

• Understand the difference between helping and coddling.

• For your college-aged child, resist the impulse to intervene in conflicts by calling or e-mailing a roommate, a professor, or a bishop—even if your child asks you to.

• Find meaning and enjoyment in your own interests separate from your child.

Sue Bergin is a hospice chaplain and author of the new book Am I a Saint Yet? Healing the Pain of Perfectionism.

A Guide to Young Love