This family brings down the barn. 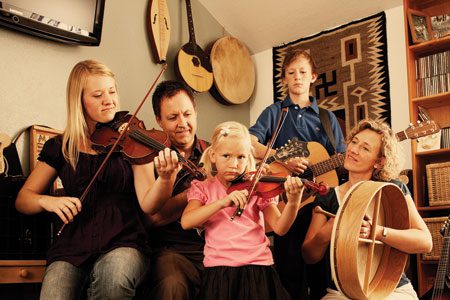 The first time Jeanette K. Geslison (BA ’91) met Mark (BA ’90), she fell right into his arms. She had just boarded a crowded metro in Moscow, and when the train lurched forward, Jeanette fell back, right into her future husband.

The two were students at the time, touring with BYU’s folk ensembles. Mark, a self-taught musician, played guitar for the group. Jeanette, a dancer, grew up in Denmark and originally planned to study for only a year at BYU. But her involvement in the International Folk Dance Ensemble—and with a certain guitarist—changed her mind.

Today, Mark is artistic director of the BYU Folk Music Ensemble and Jeanette teaches in the Department of Dance. They instruct and mentor the very same groups they toured with years ago.

But at the end of the day, in a simple studio behind their house, they also mentor a smaller group: the Geslison Family Band. In a culture saturated with pop music, the Geslison Family Band doesn’t play your typical top 10. They play freewheeling folk music as naturally as a group from Appalachia, and the precocious Geslison children have kept up from a young age. As a family, they preserve and promote traditional music that few people are familiar with today.

“We keep it alive from a historical sense,” says Mark.

A typical Geslison performance begins with their daughter Alina playing a slow solo on the fiddle. Her fingers sound lonely notes that flow without a snag. She takes her time, gives every note its due, then wakes her bow from its mournful tempo. Mark lays down a rhythmic progression on the guitar while his son, Isaac, joins on bass. Jeanette pushes the beat with a drum and you realize Alina was just getting warmed up. Notes tumble from her fingers. The tempo quickens again as her bow flutters over the strings, sounding every note—no matter how fleeting.

Alina, 18 and now a freshman at BYU, began learning to play the fiddle and violin at age 5. She and a friend recently won the national championship in partner fiddling; and Alina placed ninth in the nation for individual fiddle performance. Isaac is 13 and the current Utah state guitar champion in the 14-and-under age group. When he was 10, before the age groups were established, he competed against players in their mid-teens and came away champion. He can also play banjo, bass, and mandolin. The youngest Geslison, Ellie, is already learning the fiddle at age 6.

“We’re not trying to create the next national fiddle champion,” says Mark. “We’re just trying to elevate, to be at a higher level that’s right for us.”

The Geslisons want people to remember traditional art forms. So between September and May they play a barn dance once a month in Mapleton, Utah. The barn dance is an anachronistic medley of folk entertainment where things are pretty simple: a big red barn, raucous fiddle music, and lots of dancing. “We get together in a social setting where people are detached from these gadgets that are so hooked onto us nowadays,” says Jeanette. “It’s like a true old-time gathering.”

The public is welcome. Jeanette teaches folk dances, then the band plays so everyone can practice. Mark switches from guitar to mandolin. Alina stokes the air with her fiddle. Isaac plucks his guitar like someone twice his age. Ellie wanders the stage, awaiting her time to join in.

Mark and Jeanette don’t know if their children will become professional musicians; they say it doesn’t really matter. They just want them to develop talents and live on a creative level. As for the music, it never goes away. “It’s always there for you to help make other people happy,” Jeanette says.

From 1906 to 1972, BYU students annually climbed Y Mountain, hauling brushes and lime to whitewash the Y.