Krystal Beslanowitch’s murder case haunted members of the Wasatch County Sheriff’s Office for nearly two decades. In late 1995 the 17-year-old was fatally struck by a river rock, and Deputy Todd Bonner vividly remembers seeing her body lying by the Provo River near Midway, Utah. The sheriff’s office interviewed several hundred people statewide and pursued every lead possible. However, without suspects and with limited evidence, the trail quickly went cold.

Fast-forward 18 years: technology had finally caught up with the crime. Bonner, now the sheriff, ordered a novel DNA-collection method to help defrost the case. This cutting-edge forensic tool, called the M-Vac System, is manufactured and marketed by a Salt Lake City–based company led by BYU graduate Jared V. Bradley (BS ’93). 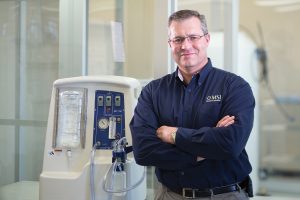 Bradley’s late father developed the wet-vacuum sampling device to collect pathogens from food surfaces with the goal of improving food safety. Upon the advice of a friend, and after substantial testing in private laboratories, Bradley and his team repurposed it as a DNA-collection tool for crime scenes and labs. They learned that a combination of a sterile spray and vacuum pressure applied simultaneously to a surface greatly enhanced the amount of DNA that could be collected.

In Beslanowitch’s case, investigators had saved the murder weapon, and when they applied the M-Vac onto the permeable stone, they were able to collect sufficient material to generate a full DNA profile. Investigators then tracked their suspect to Florida, where they shadowed him and retrieved matching DNA from his discarded cigarette; he is now in jail awaiting trial.

“I’m thrilled at [the M-Vac’s] capability, and I was ecstatic when it pulled usable DNA from that rough, coarse granite rock,” says Bonner, who traveled to Florida to personally handcuff the suspect.

Adds Bradley, “When we learned we could obtain a profile from a rock that had been sitting in an evidence room for 18 years, the rush of gratitude, amazement, and excitement was immense.”

It is hard to describe the thrill that comes from providing investigators a new way to solve crime.”

The M-Vac has since helped solve several cases in locations ranging from Florida to China. And Bradley now regularly travels both in and outside the United States to train law enforcement agencies on the M-Vac’s use and to raise awareness of its benefits.

“Quite a while ago we recognized that there was a weak link in the forensic DNA process, and it was primarily sample collection,” he says. “A tremendous amount of research and resources go into DNA-testing equipment, but very little [into] . . . sample collection. Using a $2 swab and expecting a million-dollar answer might not be the right method.”

The M-Vac isn’t necessary in cases with visible bodily fluids available for collection: “If you can see it, you don’t need our system,” Bradley says. But, he adds, the system provides an ideal way to gather “invisible” DNA. As an example, if someone stole a purse and grabbed the victim’s sleeve in the process, the thief likely left touch DNA on the fabric. An investigator using traditional methods would have a hard time pulling the thief’s DNA from the victim’s sleeve. The M-Vac, however, can go wide and deep, vacuuming the entire arm if needed, putting it all in one sample and concentrating it.

Bradley says he never would have imagined when he began his BYU education that he’d be doing what he does now—“but here I am. It’s an incredible place to be, and I am grateful for the opportunity to do what I do.”

And, he adds, a sense of mission keeps him engaged in his work. “It is hard to describe the thrill that comes from providing investigators a new way to solve crime,” he says. “It’s just fantastic to see the closure that comes to families of victims and to investigators who have labored on cases, sometimes for years.”

A team of BYU chemistry researchers has engineered molecules that may help prevent catastrophes in the future.

A Blue and White Cornucopia

Books by BYU alumni abound in the national and Latter-day Saint markets.