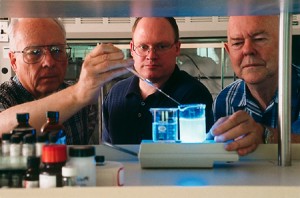 With a drop of solution – Containing a designer “chemosensor” – and a little black light, cadmium-polluted water is easily detected by (left to right) Jerald S. Bradshaw, Paul B. Savage, and Reed M. Izatt.

In the early 20th century, an epidemic of weakened bones and kidney failure befell a region of Japan along the Jinzu River. The effects were so painful, the locals dubbed the malady the itai-itai, or “ouch-ouch,” disease.

It would be several decades before they understood the cause—deadly cadmium washing downriver from a mine. The Jinzu River was the villagers’ drinking source, and their bodies slowly absorbed the cadmium, causing excruciating pain as their bones deteriorated. Eventually, many victims couldn’t walk, and a mere sneeze or laugh could cause their bones to break.A team of BYU chemistry researchers has engineered molecules that may help prevent such catastrophes in the future. In a cover article for the July 13, 2001, Journal of Organic Chemistry, the group reported creating synthetic molecules that bond with metal ions and then glow under ultraviolet light, betraying the impurity’s presence. Their methods make it easier and cheaper to detect heavy metals in water.Heavy metals such as cadmium, mercury, lead, zinc, and arsenic are found in nature in their ionic, not metallic, forms. An ion is a molecule that has an extra electron or is missing an electron, giving it a negative or positive charge. The BYU-crafted molecules are donut-shaped and designed to attract specific metal ions. Once the ions are bound, a second, “reporter” molecule attached to the donut-shaped molecule fluoresces under black light.“The two molecules together form a chemosensor—a molecule that can sense a chemical,” says lead researcher Jerald S. Bradshaw, ’66, emeritus professor of chemistry.A laboratory demonstration makes the process clear—and dramatic. Bradshaw holds a beaker of clear methanol solution that contains the team’s chemosensor for cadmium but no cadmium ions, then blasts the solution with black light. There is no change. But when a drop of cadmium is added, it glows bright blue and swirls in the clear solution as the chemosensors bind to the ions and the reporters fluoresce. The chemical reaction is dazzling to the naked eye. A small shake of the beaker turns the solution into a uniform fluorescent aquamarine.The designer chemosensors, one for each metal the team is studying, fluoresce a specific color if the corresponding metal ions are present in the solution. The intensity of the fluorescence reveals the amount of metal ions. Mercury glows green. And zinc radiates yellow or orange depending on how much is present.“Cadmium lights up so brightly it hurts the eyes,” says Paul B. Savage, ’88, an associate professor of chemistry. “Mercury doesn’t light up as brightly, but you can really see the green coming out. It’s quite a show.”Chemists have known for some time how to sense metal ions, but their methods have not been selective nor particularly sensitive.“We want to be able to bind a specific metal ion, which is selectivity. We also want to detect small amounts of our target metal ion, which is sensitivity,” says Savage. “We can do both with this technique. With specialized equipment even single molecules can be detected in some cases, which is just incredible.”The research is supported by a $500,000 grant from the Office of Naval Research, whose objective was to better detect metal ions in water. Ship boilers convert water to steam, which drives turbines. But if metal ions are present in the steam, they can destroy the turbine blades over time.“The Navy has a great desire to have very, very clean water, and they want to be able to detect trace amounts of contaminants,” says Bradshaw.Three to four years down the road, the researchers hope to complete the engineering of a device that could be used to measure trace metal ions in effluents from factories. Currently effluents are tested by taking samples at periodic intervals, providing only a snapshot view. The BYU device could be used for continuous measurements.“With any industrial process that’s putting out metal ions, one would expect fluxes in the concentrations. If monitoring is not continuous, then one might check at a low point and miss quite a bit of the metal ions coming out,” says Bradshaw. “Our instrument will be able to continuously monitor the amount of lead or mercury or cadmium that a factory is pumping out into the sewer or a lake.”The result could be cleaner water, which is safer water, and thus lower rates of birth defects, cancer, and other problems associated with consumption of heavy metals. The methods could also be used to create better and cheaper tests for measuring heavy metals in human blood.For 30 years Bradshaw and Reed M. Izatt, ’56, also an emeritus professor of chemistry, have been creating synthetic molecules for the purpose of binding and studying ions. The two have published some 400 journal articles between them, many of them groundbreaking; but this is the first to make it onto the cover of the Journal of Organic Chemistry—”a once-in-a-lifetime event,” says Bradshaw.Their research has also received widespread attention in media for lay audiences. Three Utah television stations covered the story, as did National Public Radio’s “Living on Earth” program, the UK Financial Times, the Salt
Lake Tribune, and the Deseret News. 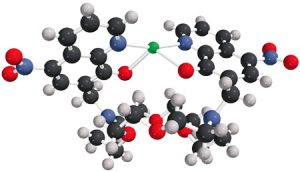 This complex molecule, engineered by BYU chemistry researchers, may someday save lives. Created to fluoresce in the presence of mercury ions, it is one of several molecules the team of researchers has created to detect toxic metals in water.

For Savage, who is in the early stages of his career, being able to work with such distinguished colleagues is a privilege
. “I get to stand on the shoulders of giants,” says Savage. “It’s very exciting to me because there’s so much we can do and do quickly because of the work they’ve done in the past.”Other members of the team are R. Todd Bronson, ’96, a graduate student; postdoctoral researchers Saowarux Fuangswasdi and Sang Chul Lee; and Krzysztof E. Krakowiak, director of organic synthesis at IBC Advanced Technologies.Izatt is passionate about the environmental implications of this work. “There are some enormous needs out there for these kinds of things and enormous forces that act against those needs,” he says. “A lot of legislation follows the science. When you can detect metals at lower concentrations, then there is pressure to pass laws requiring com
panies and others to meet those concentration levels.”Izatt was recently in Japan to present the research, and he said the ouch-ouch disease is still well known there, even though the cadmium has been cleaned up and most victims died years ago. He hopes this research will mean the United States and other countries will be more likely to detect and remove these deadly metals before tragedy strikes.“You can have real disasters with cadmium, lead, arsenic—and they’re people disasters. They do enormous amounts of harm,” says Izatt. “Any industry or government that thinks it has a problem with metals will be able to use this research.”

M. Sue Bergin is a writer and editor living in American Fork, Utah.

Alumni Ron Richmond has an eye for the off-balance. It's from the asymmetrical he creates stunning art.