The Connection of Love

By Karandeep Singh in the Summer 1995 Issue

This article, by Karandeep Singh, was one of two valedictory addresses given at commencement. Originally from New Delhi, India, Singh graduated with University Honors in humanities-philosophy and anthropology. He is teaching anthropology at BYU before beginning a doctoral program in American Studies.

Twenty-two years ago, two wonderful people decided to instill in their little son’s heart a dream. This dream, to combine the most rigorous possible scholarship with the humblest discipleship, seems to be becoming a reality as I stand here today, having been given the honor not only to represent the graduating class of 1995, but also to share the podium with President Gordon B. Hinckley, President Rex E. Lee, and Dr. Robert Fogel, a Nobel laureate economist. Ladies and gentlemen, those two wonderful people have travelled a long way to be among us here, and I would beg your indulgence for just a moment as I dedicate my commencement speech to my parents and recognize the blessing they are in my life.

As the first member of the Sikh religion to graduate from BYU, I wish to speak today about the connection of love—the connection that, in locating its source in God, transcends the human barriers of color, ethnicity, gender, and language to embrace all of creation. The founder of Sikhism, Guru Nanak, the man whom all Sikhs aspire to emulate, said: “There remain no foes and no strangers; the connection of love with all beings has been established.” Such is the love I feel exuding from the Master, Jesus, as he writes in the sand, with the abased adulteress and the incredulous Pharisees at his side. Such is the love that emanates from the Buddha’s being as he preaches the eightfold path. Such is the love that the ninth Sikh prophet, Tegh Bahadur, exhibits as he lays down his life for the sake of another community’s religious freedom. Sikhism, then, is more than a religion of 20 million adherents worldwide; it is a way of life that entails selfless service and aspirations to divinity. As Ravidas, an enlightened man in medieval India, uttered in a blissful moment: “The Supreme Ruler is no one’s heritage; He belongs to them who love Him.” 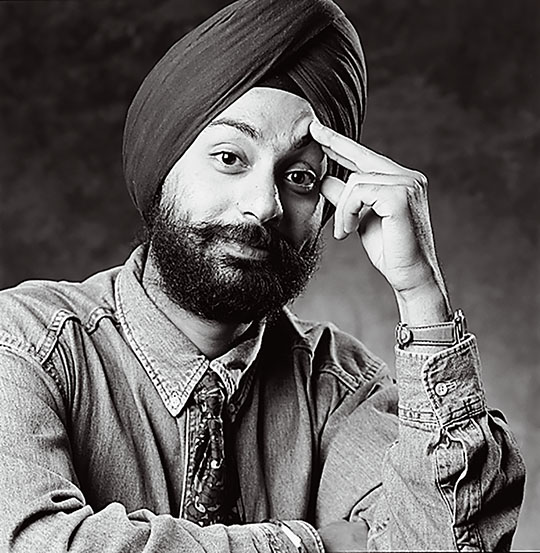 “When the Master speaks about loving our neighbors, he includes those neighbors who don’t come to church with us. When President Howard W. Hunter exhorts us to be kinder and gentler, he envisions not just a harmonious ward, but a united cosmos.”–Karandeep Singh

Ever since that warm August day of 1992—my first day on campus—my soul has bathed and basked in the loving sunshine that the BYU community so generously showers upon me. I chose BYU because I wished to pursue learning in a community: a community of dedicated disciples who are also first-rate scholars. I chose BYU because I had imagined a place where a din of well-informed voices ushers the future into the present. I chose BYU because Tagore, the Nobel laureate from India, inspired me to think of a place “where the mind is without fear and the head is held high.” BYU appealed to a 19-year-old Sikh in New Delhi because it upheld the same values his parents had instilled in him—it sounded like a place where he would find fellow disciples. That 19-year-old is now 22. And he stands before you today, struggling to express his gratitude to all of you. You whose tithing money made his education possible; you whose loving care led him through moments of darkness and despair; you whose gentle admonitions helped him grow in humility; and, perhaps most important, you whose examples inspired him to become a better scholar and a better disciple.

As a member of a religious minority, as a disciple in a tradition where three of the prophets were martyred for their convictions, being at BYU has had more than a mere academic signiﬁcance for me. I’ve been moved beyond words by the inspiring stories of courage and faith exhibited by Latter-day Saints, even during torturous persecution. Perhaps the thing that brings you and me together most is this legacy of martyrdom. But now that we enjoy religious freedom, it seems to me imperative that we become the examples of tolerance ourselves. The Pauline injunction to “follow after charity” (1 Cor. 14:1) is perhaps more urgent in our strife-torn, burning world than at any other time in history. Brothers and sisters, as we step out into the world as graduates of this nurturing school, the responsibility to enact the teachings of our prophets weighs heavy upon us. For only in this enactment can we hope to make a positive contribution and uplift Mother Earth’s burdened children.

Being at BYU has reaffirmed for me that when the Master speaks about loving our neighbors, he includes those neighbors who don’t come to church with us. When President Ezra Taft Benson addresses the notion of pride, he is speaking specifically to us religious folk who get so easily ensnared in the holier-than-thou trap. When President Howard W. Hunter exhorts us to be kinder and gentler, he envisions not just a harmonious ward, but a united cosmos. Only when we live our religion instead of merely talking about it will we honor the vision of the man who founded this university. The world will behold intelligence as the glory of God only when our lives become the manifestation of our beliefs. It is only then, fellow graduates, that the Honor Code will become more than an annoying discomfort while choosing one’s dress for the day. It will then entail, instead, a dedication to charity. President Thomas S. Monson spoke during the last general conference about bearing each other’s burdens. In our memorable years at BYU, I’m sure all of us have come to realize that bearing each other’s burdens is not a facile calling; it is the challenge of mortality. My dear brothers and sisters, come let us pray—whether it be in English, Spanish, or Punjabi—but let us pray lovingly together that our beneﬁcent Almighty bless us with the strength to endure through that challenge to the end. In the name of all His enlightened prophets, who walked this arduous path to show us that we, too, can do it, I pray with reverence. Amen.

As we strive to become like Christ, our talents, experiences, and even quirks will remain with us.