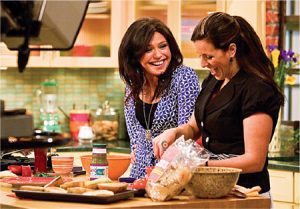 Erin Mylroie’s winning recipes have taken her to the Rachael Ray Show (above) and Disney World.

When Erin Renouf Mylroie’s (BA ’95) Young Women class staged a talent show, her talent was a bean dip. The entire group laughed, but hers was the only talent devoured by all that night.

The experience cemented her reputation as a good cook in her small southern Utah town, and her skills with food have become a talent that people across the country can appreciate. Many of her recipes are national prize winners, typified by a recent first-place specialty hamburger that landed her an appearance on Rachael Ray’s national television show. Other competitions have yielded cash prizes, a first-class trip to Walt Disney World for her family of four, and a trip abroad to sample fine foods as the national winner of a recipe contest sponsored by the magazine Taste of Home.

“My Italian mother is an outstanding cook,” Mylroie explains. “I learned to cook at her side and adopted her philosophy that people should be free to explore and try new things.”

As a child she remembers experimenting with her dishes. She says she has the ability to “taste” a recipe just by looking at the ingredients, and she reads recipe books in the same way other people read novels.

“My husband and I visit a bookstore, and I’ll find a corner and read cookbooks until it’s time to leave,” she says.

That doesn’t necessarily mean she uses the books. She’s skilled enough to make the recipes her own, and she doesn’t fear failure, because she can usually find a way to resuscitate a dish.

Although all 10 Renouf siblings are considered fine cooks, Erin is the one everyone calls for help on Thanksgiving and other special occasions. One of her husband’s happiest surprises, he says, was learning that she has exceptional skills in the kitchen.

As others learned about Mylroie’s skills, they would often ask her if she had ever thought of entering a cooking contest. She finally considered it while writing a master’s thesis in 2004. Needing a creative break from technical writing, she learned that Pillsbury was accepting recipes, purchased a lot of Pillsbury products, and started cooking.

Pillsbury called to let her know that her recipe, a breakfast version of bananas foster with yogurt and granola, was a finalist. Mylroie was flown to Los Angeles for further competition.

“I didn’t think it was that big of a deal until I got there,” she says. “I met people who had been trying to make the finals all their lives. I started to think that maybe making it the first time wasn’t a fluke. Perhaps I had a talent I could pursue.”

Eventually Mylroie hopes to write a cookbook, but at that point she will be considered a professional and will be ineligible for many of the competitions.

For those interested in entering food contests, she recommends learning to write precise instructions. “Just look in any ward cookbook, and you’ll see that many of the recipes make assumptions about how the recipe should be made,” she says. And creative descriptive names—such as her Serendipity Ginger-Scented Peach Cobbler—have been winners with judges and family.

2. In a large microwaveable bowl, combine butter and chocolate. Melt butter and chocolate in microwave on high at 1-minute intervals, stirring in between. Do not let mixture sizzle. When mixture is completely melted and smooth, immediately stir in sugar; continue stirring until smooth. Add eggs, one at a time. Stir in vanilla and buttermilk. Add 1 1/2 cups flour.

4. Pour into greased 9-by-13-inch baking dish and bake for 28 to 33 minutes, or until toothpick inserted into center has just a few fudgy crumbs. Let cool for 30 minutes. Dust with powdered sugar.

Exceeding the Goals, Continuing the Giving

When BYU set out to raise $250 million in six years, some called the campaign ambitious.