A new book by a BYU emeritus economics professor explores what he calls “the wasteful and perverse consequences” of the U.S. government’s agricultural policies.

B. Delworth Gardner’s Plowing Ground in Washington: The Political Economy of U.S. Agriculture is an argument for government reform in the agricultural sector and is based on his more than 30 years of research in agricultural economics.

“Political support for government farm programs has remained strong even though the number of farmers in America has shrunk to a minuscule proportion of the total population,” says Gardner.

“With the present concern about wasteful government-spending programs, agricultural subsidies are now coming in for fresh scrutiny from the government,” he says.

In the new book, Gardner examines the consequences of decades of farm subsidies in America.

“Farm subsidies reduce our standard of living and redistribute income from taxpayers and consumers to farmers and landowners who are typically richer than average Americans,” Gardner believes. “In effect, we pay twice: ﬁrst in taxes to provide subsidies and then at the grocery store in the form of higher prices due to the distortion subsidies cause in the marketplace.”

Moreover, farm subsidies have serious environmental consequences that are often forgotten in the debate over farm policy, he adds. “The subsidies lead to the use of more chemicals on more land, and some of these chemicals have bad environmental consequences,” he says. “Fertilizers tend to run off into ground water and become a burden to people. The use of some pesticides that are carcinogenic is stimulated by the subsidies.”

“Furthermore, if more land is plowed up because of the subsidies, habitat for wildlife and open space for consumer use is diminished.” 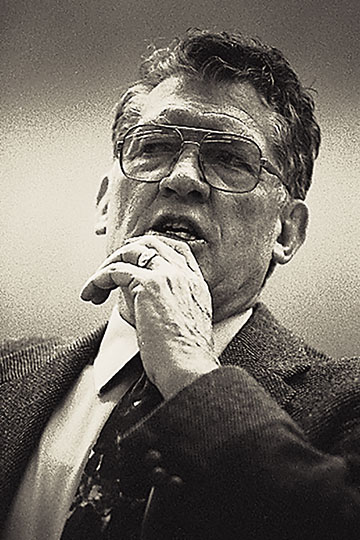 “With farm subsidies, we pay twice: first in taxes to provide agricultural subsidies and then at the grocery store.” –B. Delworth Gardner. Photo by John Snyder.

The release of Gardner’s book is particularly timely. “There’s a new agriculture bill that will be written late this summer or early fall, and I hope to have some inﬂuence on the writing of that legislation,” he says. Agricultural legislation typically comes up for review every ﬁve years.

Key players in the writing of the new bill will be committee chairs Sen. Richard Lugar, R-Ind., and Rep. Pat Roberts, R-Kan. “Senator Lugar, who is also a declared presidential candidate, is already on record for diminished subsidies, while Representative Roberts, his fellow ‘wheat state’ congressmen, and President Clinton have indicated support for continuing them,” Gardner says.

Letting Go and Holding On to Childhood

A father and his young son face the rush of time.

Lessons from a Letter

The Y on the mountain above campus reminds us that perspective matters and failure is not final.