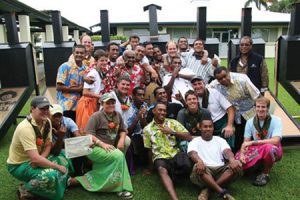 When The Church of Jesus Christ of Latter-day Saints first sent dry-food storage bags to the Pacific Islands, there were no instructions for drying native foods. For the most part, subsistence farmers were unable to preserve their excess crops. If harvested, the excess usually spoiled, unused. And when tropical storms ravaged their fields, their crops were destroyed altogether.

Enter Frost M. Steele (BS ’85), assistant professor of food science. Commissioned by the Church in 2003 to help islanders prepare food for storage, Steele began by assessing the typical Pacific Islander’s diet. With an electric food dryer, he found he could preserve island staples like taro and cassava—crops that can take up to nine months to grow.

But electricity is neither abundant nor affordable in many parts of the islands—so an electric dryer wouldn’t do. With inexpensive local materials, Steele set out to harness the power of the sun.

Combining ideas from existing research, he developed a solar-powered dryer about the size of a pinball machine. It heats up to 140 degrees Fahrenheit, the optimal temperature for drying foods, says Steele, and the food can last five years or more when packaged and stored properly. In Steele’s office there’s a dried-food snack bar of sorts with breadfruit, yam, taro, and cassava dating back to his 2003 visit to the islands.

“People who have tried it have said, ‘It tastes almost like fresh,’” Steele says.

With Steele’s enclosed design, food is protected from direct ultraviolet light, which can cause nutrient damage. Made mostly with lumber and plexiglass, the dryer makes food storage possible for Pacific Islanders.

“Here are these people who really want to follow the prophet, but practically speaking, they couldn’t do it,” says Laura Cormack Jefferies (BS ’94), the BYU Sensory Lab manager who collaborated with Steele on the project. “They have the tools now to follow the prophet’s admonition to be self-reliant.”

Funded and accompanied by donor Marc Barkdull and the Barkdull family, Steele returned to Fiji in 2008 to teach members how to build and use the dryers. He is seeking to fund a similar workshop in Samoa for summer 2010.

He also continues to improve the model; his research on the optimization of the chimney height and the number of drying racks was published in the International Journal of Food Engineering in 2009.

In the face of financial hardship, Brandy Simper became a prudent homemaker.