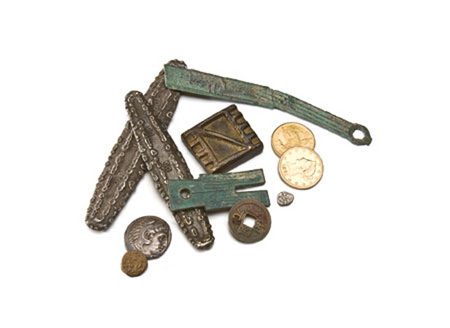 Shells, stones, swords, and scalps—according to economics professor James R. Kearl, money can be anything as long as people accept it in exchange. His collection of about 30 different, mostly tribal, currencies from Africa, Europe, Asia, and the South Pacific visually demonstrates this

concept to his Econ 110 classes.

In an auditorium of more than 300 students, Kearl holds up a large shell hanging from a leather cloth like an oversized jewel on a necklace. The shell is a rare and fragile piece of money from Africa; the leather strap, he explains, was used as a sort of purse. Another of Kearl’s pieces has a stack of smaller shells attached to a pole—“a Papua New Guinean tribesman’s bank balance,” he says.

His demonstration continues with the Katanga cross (right, center). Measuring 8 to 9 inches across and weighing about 2 pounds, this copper cross isn’t exactly what you’d call pocket change. But in 19th-century Zaire, it meant mobility for one British explorer, who ferried all of his men across an African river for three Katanga crosses.

There’s coinage in Kearl’s collection, too. One of his coins was minted by Alexander the Great, whose face is stamped on one side. All-silver coins from Thailand known as “tiger tongues” were last used 150 years ago. Yet another of Kearl’s coins was issued by Pontius Pilate. Kearl made his wife, Linda, a necklace out of a $10 coin. Made of pure gold, the coin circulated in the U.S. economy until 1930.

Kearl tells the class he was once tempted to buy a piece called “feather money,” a roll of woodpecker scalps spanning about 30 feet, but he passed on the $15,000 price. “I decided . . . well, I didn’t decide anything. My wife decided that we weren’t going to have that as money,” he tells the class.

Although he finds educational value in these currencies, his main reason for collecting them, he says, is their beauty.

Sculptures or money? These currency pieces came from African tribes. At center is the Katanga cross.

After 15 minutes of unveiling currency after currency in class, Kearl stops and says, “You’re all thinking, ‘This guy is a little loopy about this.’” And with a smile he adds, “Well, yeah, I am.”

U.S. Ballroom Champions: Dancing for a Decade at BYU

In the summer of 1950 the Cougar men’s basketball team took its first trip abroad—a 33-day tour of South America.

Whatever the future brings, Pili is grateful for the discipline he learned from football.