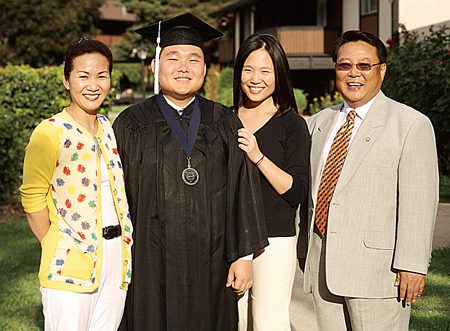 Dan Kim (BA ’07) celebrates at graduation with his mother, Il-Mee Kim; his sister, Skye Kim; and his father, Young-Joo Kim. Kim’s family immigrated to the United States to give their children educational opportunities.

Dong-Jin “Dan” Kim (BA ’07) studied the English alphabet for the first time on an airplane as he immigrated to the United States with his family at age 11. Now he’s beginning graduate work at England’s second oldest university—all expenses paid.

One of 34 undergraduates selected out of 1,000 applicants nationwide, Kim received a scholarship from the Jack Kent Cooke Foundation worth up to $300,000, the maximum amount the foundation awards to fund graduate study. He plans to use the scholarship to earn a PhD in international relations at the University of Cambridge, where he will research economic solutions to international-migration issues.

Kim’s graduate work at Cambridge will build upon the research he started at BYU. Under the guidance of economics professor Kerk L. Philips (BA ’86), Kim researched the potential impacts of economic reform in North Korea. But Kim’s connection to North and South Korea stems from more than just scholarly interest.

Hoping to give educational opportunities to their children, Kim’s parents immigrated to the United States from South Korea in 1994, eventually settling in Orem in 1996. Kim’s father returned to South Korea in 1996 to start a business, but when the Asian market crashed in the summer of 1997, Kim’s father lost his savings and was unable to leave South Korea for two years.

Ten years after the market crisis, Kim was thrilled to tell his parents that his graduate education would be completely paid for. “I remember my father telling me, ‘It’s hard to believe that a grandson of a Korean War refugee is going to a place like Cambridge,’” Kim says. “Of course, my mother started to cry and then she said, ‘If that’s the case, then it was all worth it.’ To hear her say that was worth more than the money in the scholarship.”

Participants in an alumni tour to the South Pacific will enjoy performances of BYU's highly acclaimed Living Legends.

Standout faculty, administrators, and staff were honored at the 2012 Annual University Conference.

For seven consecutive years the Chattanooga chapter has raised funds for student scholarships.