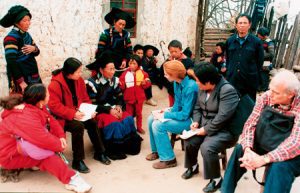 Marcie Holloman (left, center, and above, middle) and other student volunteers spent two months teaching Chinese villagers and leaders how microcredit – Small loans for self-employment project – can add convenience and quality to life.

TRAVELING for hours on dusty roads to a remote, mountainous region of China, international studies graduate Martha A. (Marcie) Holloman, ’01, led a team of five BYU students to villages lacking running water, indoor plumbing, and modernized health care. The students taught villagers how microcredit—small loans for self-employment projects that generate incomecould provide conveniences commonly taken for granted in the Western world.
“When I asked the villagers what they thought they could do with the loans to improve the quality of their lives, they got a look of excitement in their eyes,” says Holloman. “One lady said, ‘I would like to build sanitary pay toilets for the whole village.’ Everyone got excited and started clapping.” 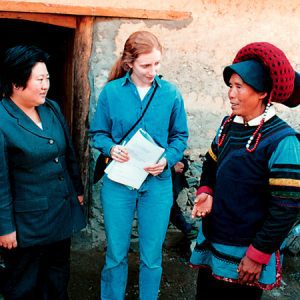 During her two-month stay, Holloman spent time doing research, translating manuals, giving literacy classes, and teaching microcredit methodology to Chinese leaders.“It’s amazing that at her age and experience level, Marcie is planting the seed and running a major program in such a complicated country as China,” says Warner P. Woodworth, ’67, BYU professor of organizational behavior. “Her passion and knowledge make her an excellent role model.”Her trip to China was an extension of an organizational behavior capstone course taught by Woodworth. After living in Asia for 10 years and serving a mission for The Church of Jesus Christ of Latter-day Saints in Taiwan, Holloman says she had always looked for a way to return.“When he said they were looking for people who were interested in microcredit and who spoke Mandarin, I jumped at the opportunity,” she says.In addition to Holloman, the volunteers included two BYU graduate students, Doris Wah Pai, ’99, from Hong Kong, and Beng Ling Pang James, ’02, from Singapore, and three undergraduates, Jia Jiang, ’02, from China, J. Carter Hilton, ’03, from Washington, and James M. Johanson, ’02, from Utah. When the students first arrived, they visited the rural outskirts of Beijing, where the first Chinese microcredit program was established in 1994. “It was exciting to see how it works firsthand. I’d read about microcredit in classes and discussed the issues, but actually seeing it being used to improve people’s lives was really impressive,” Holloman says.Holloman says her BYU experience has inspired her not only to pursue microcredit financing as a career but also to include a component of international service in whatever she does.Woodworth says, “Marcie is an outstanding student who could be making the big bucks with an internship at a big corporation. But she has decided to spend her life exemplifying the BYU motto—Enter to learn, go forth to serve.”