LaVell Edwards Stadium is filled to capacity with new food choices for fans and spacious seats for the Cougar Club. 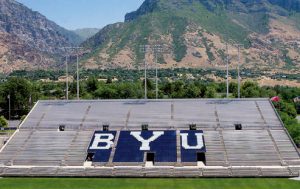 More than 1,700 premium Cougar Club seats have replaced benches on the east side of LaVell Edwards Stadium. These seats feature expanded with and legroom as well as a captivating view of the action between the 25-yard lines. Photo by Jaren Wilkey.

They are the things BYU football fans dream about at night: priority parking close to LaVell Edwards Stadium, a pregame chat with a BYU football coach over a hearty meal, prime midfield seats (to which food is delivered during the game), and postgame highlights presented on big-screen TVs until the traffic dies down.

To enhance the game-day experience, BYU athletics has made such dreams a reality for Cougar Club members willing to pay the price. For donors who contribute at the $1,000 level, club season seats with all the benefits can be purchased at $1,000 a piece. For donors at the $500 level, seats with fewer benefits can be purchased for $500. While the remodeled section reduced the overall stadium capacity by 1,000 seats, it will add about $1 million a year in revenue.

“This program’s financial impact plays a key role in providing our student athletes with the resources to succeed both on the playing field and in the classroom,” says Q. Val Hale, ’81, BYU men’s athletic director.

Many of the perks are provided in a hospitality tent just outside the stadium. There, fans enjoy delectable pregame meals featuring such specialty items as tender corned beef and fruit and marshmallows for dipping under the sumptuous cascades of a 4-foot chocolate fountain. 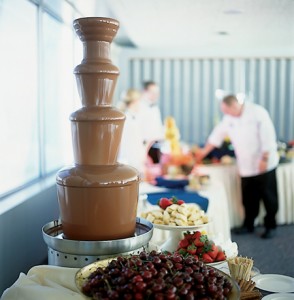 In an effort to make every stadium trip a delicious memory, pampered fans can dip fruit or marshmallows into a 4-foot chocolate fountain. Photo by Bradley Slade.

Fans can easily find their place in the stadium, since the new blue and white chairs in the middle of east sideline stands are arranged to spell out BYU in huge block letters. When they get there they find cup holders and extra legroom. On hot game days, they are served ice cream and other cool treats; for cooler game days, they receive hot chocolate.

But fans don’t have to fork over $1,000 to fork down good food at the stadium this year. When BYU adopted new NCAA security guidelines that keep spectators from bringing food or drink into the stadium, the stadium concessions areas were remodeled to provide more choices for hungry fans. Nine restaurants—including Durango’s Grill, McGrath’s Fish House, Ruby River Steak House, Hogi Yogi, and Wallaby’s—join forces with BYU’s traditional concessions to keep spectators well fed during games, at a price point well below standard stadium food pricing.

“Dining services and athletics worked around the clock to get this ready for football season,” says Hale. “It is unlike anything BYU fans have ever experienced.”

Take a tour of the upgraded Lavell Edwards Stadium at the height of game-time festivities.

”Dinosaur Jim” made a big find in 1972—the bones of a new dinosaur, the Supersaurus.

That You May Be Instructed More Perfectly

There's a difference between learning and schooling: schooling is a game but learning is not.