An accident that caused Spencer Phillips to lose his hearing eventually led to his career as a successful attorney representing deaf persons.

As soon as Spencer D. Phillips, ’00, slipped and hit his head during a summer party more than 20 years ago, the 7-year-old knew he was in trouble. He had ruptured the oval and round windows in his ears and the cochlear fluid drained out.

Despite immediate surgery his hearing never returned. It dropped off so dramatically that when Phillips’ ears stabilized, he was left with no hearing in his left ear and only 20 percent in his right one.

More concerned about playing with his friends, Phillips had no way of knowing the accident would eventually set in motion a career as an attorney who represents deaf persons (his preference over the phrase “hearing impaired”) and even lead him to his wife.

A good student, Phillips resisted sign language and didn’t want to view himself as deaf. Although his mother told him she thought he would eventually serve a deaf mission, that option made him uncomfortable until he had a dream in which he realized he was talking with his hands. 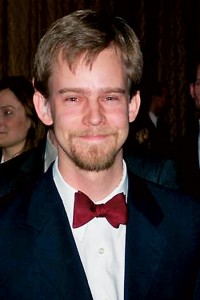 “I remember thinking, I could do that. I had been waiting for my call for three or four months, which is a long time for a 19-year-old,” he says. “Right after the dream, I got the call for a service sign-language mission in New York and learned sign language in the MTC. Because I had lost my hearing, I was in an ideal position to learn how the deaf feel, think, and do things.” As he analyzed specific needs of people who can’t hear, Phillips began to consider a legal career. “Law is geared entirely to people who hear,” he explains. “You stand in court and talk with a judge and jury. Everything is verbal. With my mission experiences I realized I could straddle both worlds and communicate with hearing people without using a third-person interpreter.”

He returned to BYU and saw a job opportunity posted to assist a deaf man living in a group home. As Phillips explains, “I got one of the slots. The other was filled by a very pretty girl [Kristin Clayton, ’99] who was an amazingly fluent signer. We dated, got married, and lived in a deaf ward for four years. Meeting her has been one of my greatest blessings, something that would not have occurred had I not learned sign language.”

Phillips earned an English degree and entered BYU’s J. Reuben Clark Law School, where he became only its second deaf graduate. In his third and final year he learned about a new award called the Hannah S. Cohn Equal Justice Fellowship.

“I realized deaf people do not have the same rights as hearing persons,” Phillips explains. “There are many civil rights laws to protect deaf people but few to assist them. An inability to communicate is the main issue, and I was sure I could help. I applied for the fellowship and stressed how I wanted to assist the deaf population in Rochester, N.Y.”

He received the fellowship, passed the New York bar exam, and is now building a substantial clientele. He also lectures groups of attorneys, doctors, and medical students who want to learn how to interact with the deaf community. “It’s a wonderful job with many opportunities to help people,” he says. “I couldn’t ask for better job satisfaction. This is what I was looking for when I began law school.”

Going Forth: Family Dancing, Rescue Flights, and Art by the Blind

BYU alumni put their talents to use on the dance stage, in the rescue-plane cockpit, and in a classroom for the blind.