Seeing Beyond the Wedding

It has been said that the respect and importance we give to a vocation can be measured by how seriously we prepare for it. If that is true, how does society currently appraise marriage? Given the amount of preparation and money put into most weddings, one could argue that we collectively esteem weddings to be very important. But what about marriage itself? Elder David B. Haight of the Church of Jesus Christ’s Quorum of the Twelve Apostles has said that engaged couples should do more to intentionally prepare for married life. “Considering the enormous importance of marriage, it is rather astonishing that we don’t make better preparation for success,” he says. “Too many people are inadequately prepared for this lofty responsibility.”1

Family scholars have also stressed the importance of marriage preparation, and there is growing consensus about key areas on which engaged couples should focus. Their findings are almost uniformly in harmony with prophetic counsel on creating and sustaining loving, eternal marriages. Many of these suggestions can be brought together into three principles of marriage readiness—having realistic expectations, developing virtuous attributes, and learning to handle differences constructively. These principles can also provide a “relationship checkup” for already-married couples.

We live in an age of “soul-mate marriages”—where love is frequently portrayed as a matching with one’s “other half” and marriage is seen as an easy pathway to personal happiness. In a recent national survey of single young adults, 94 percent agreed with the statement “When you marry, you want your spouse to be your soul mate, first and foremost,” and 88 percent agreed that “there is a special person, a soul mate, waiting for you somewhere out there.”2

Soul-mate marriage may work for Hollywood films, but most married couples in the real world know that, while marriage is definitely worthwhile, it is not like relationships portrayed in popular culture. They will admit that maintaining their marriage requires work, patience, personal growth, compromise, commitment, and sacrifice.

President Spencer W. Kimball warned young people of the soul-mate culture of our day: “‘Soulmates’ are fiction and an illusion; and while every young man and young woman will seek with all diligence and prayerfulness to find a mate with whom life can be most compatible and beautiful, yet it is certain that almost any good man and any good woman can have happiness and a successful marriage if both are willing to pay the price.”3

Does believing in soul-mate marriage really do any harm? The evidence indicates that it does and that the trouble lies in unrealistic expectations. When marriage is expected to be a trouble-free relationship, many couples are left grasping for answers when they have their first major disagreement or when a spouse’s lack of responsiveness leaves one partner feeling hurt and alone. 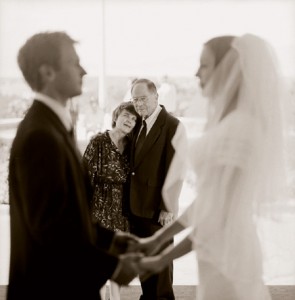 Long-term marital success is more likely for couples who put significant effort into preparing for marriage– not just the wedding. Photo by Bradley Slade.

The romantic notions of soul-mate marriage offer couples very little direction on ways to improve, restore, and maintain a marriage in the real world. Unrealistic expectations can lead disillusioned partners to believe that their problems result from a “faulty match” and, therefore, that the solution is to “unmatch” and “rematch” with their “real” soul mate.

The gospel of Jesus Christ teaches that sustained love in marriage is not primarily about matching or finding; rather, it is about becoming and choosing. 4 This perspective fosters the realistic expectation that marital companionship must be nurtured, repaired, and chosen daily as spouses bind themselves together with their love, forgiveness, and sacrifice.

To help establish realistic expectations, an engaged couple could interview a husband and wife they admire who have been married for several years. They might ask this “mentor couple” to share some of their efforts to make their marriage work. It is also helpful to read articles and books together on what to expect in marriage. A collection of such writings by Church leaders and family scholars can be found on the Before Forever Web site (marriageinfo.byu.edu), sponsored by BYU’s School of Family Life.

Leading marriage scholar Blaine J. Fowers explains what years of counseling and research have taught him about marital success: “The best way to have a good marriage is to be a good person.”5 In particular, Fowers suggests four “marital virtues” that every fiancé should foster. The first is friendship, which is embodied in the characteristics of caring, helpfulness, and companionship. Second, individuals need generosity, which they exhibit by freely giving to, forgiving, and seeing the best in one another. The third essential virtue is fairness, being willing to shoulder the work of marriage together and prepared to rely on the strengths each spouse brings to the relationship. Finally, Fowers argues, someone preparing for marriage should develop loyalty, a steadfast commitment to the relationship in spite of difficulties that will inevitably arise in marriage.

As individuals focus on developing the virtues of a good spouse, they begin to view marriage as more than just a means to personal happiness; rather, they see it as a partnership that invites them to live outside themselves for the good of their future spouse and others. As one wife of 10 years said, “I think a lot less about what I get out of the relationship and more about what I can give to it. I think a lot about how I can keep our togetherness going and about how it is good for our children. We are a couple in love, and we have lived through a lot of difficult times. We work through those problems together and always come back to that love. I’ve seen it grow stronger and deeper as a result.”6

One way engaged couples can identify and nurture such attributes is to complete a relationship-assessment questionnaire. Focusing on the respondent’s background and interactions with the future spouse and others, such questionnaires give individuals a chance to consider their attributes and locate areas for improvement in the relationship and in their personal lives. One questionnaire that is appropriate for both engaged and married couples is RELATE (available at relate.byu.edu).

During the last 20 years, marriage scholars have increasingly focused on how couples deal with differences and handle conflict in their relationships. Numerous studies have shown that what distinguishes marriages that succeed from those that don’t is not the amount of differences in the relationship but the way differences are handled. Even before marriage, couples can evaluate their methods of handling difficulties that arise. Research points to three questions couples can ask themselves to evaluate their interactions:

“When discussing differences, do we stay focused on resolving the problem?” When couples discuss problem areas in their relationships—such as balancing the budget, dealing with extended families, or disciplining children—their conversations often veer into areas of complaint. When the focus of such a conversation has faded, discussing problems is more likely to hurt a relationship than bring a couple together. As they prepare for marriage, couples can set a pattern of discussing differences in ways that focus on finding solutions, not winning arguments.

“Do we control our emotions during conflictual exchanges?” Research has shown that when spouses allow themselves to become flooded with emotions during discussions, they rarely address their differences in a positive way. When they have concerns in their relationship, premarital couples can practice bringing them up in nonblaming ways and finding ways to soothe themselves and each other during discussions so that negative emotions are kept in check.

“Do we maintain respect and concern for one another during an argument?” Scholars have found that in successful marriages spouses maintain high levels of respect and mutual regard for one another—even when they disagree. Sometimes couples allow arguments to degrade into episodes of criticism and personal attack. This type of negative blaming and criticism can have lasting detrimental effects, sometimes causing one or both spouses to withdraw emotionally. Maintaining respect and concern for one another sends the message that the relationship is more important than the problem and that both partners are on the same side in finding ways to constructively deal with differences.

Premarital individuals and couples should consider taking a marriage preparation course or workshop. These classes typically include training in communication skills and teach ways to handle conflict constructively. A recent study found that participants in premarital programs experience, on average, about a 30 percent increase in measures of marital success. 7

Engaged couples who give serious time and attention to preparing for marriage, not just the wedding, set a foundation for marital happiness and a pattern of intentionally evaluating and nurturing the relationship. Couples who form this type of intentional marriage—a marriage that recognizes that relationships take work, that good spouses make good marriages, and that all relationships have differences that can be handled constructively—are better equipped to adapt to whatever joys and challenges may come.

Jason Carroll is an assistant professor of marriage, family, and human development in the School of Family Life.

BYWOO – Love and Marriage at BYU, Parts I & II

Alumni tell stories of how they met their spouse at BYU.