Roaring engines, flying mud, corpo-rate sponsors. Life doesn’t get too much better for an engineering major—unless you count a first place victory at the 2003 SAE Mini Baja West Competition.

With venues at BYU and in Provo Canyon, 110 collegiate teams from around the globe participated in a series of events sponsored by the Society of Automotive Engineers. The annual competition couples engineering know-how with a 10-horsepower engine.

Teams of students create one-person off-road vehicles to withstand a barrage of physical punishment. Students competed in a rock crawl, hill climb, and tests of acceleration and maneuverability. “You design the vehicle specifically for durability and robustness,” says Alison G. Castleton, ’03. That durability is essential during the final event, a four-hour endurance race. 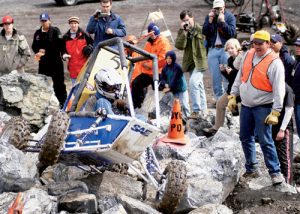 The BYU senior team’s No. 5 car took first place overall in this year’s Mini Baja competition, after winning first place in the design and sales presentation, second place in the rock crawl, and third in the endurance race. Photo by Cheryl Cox.

A capstone team, consisting of senior mechanical engineering majors, and a junior volunteer team each represented BYU. In the individual events, the BYU senior team won first place for design and sales presentation, second place for the rock crawling competition, and third in the endurance race. The junior team took third in maneuverability. Each event is worth a different amount of points, with the endurance race being worth more than everything else combined.

The cars were engineered using CAD, or computer aided design. Senior team captain Scott D. Hill, ’03, said, “We had this whole car assembled in a virtual assembly—it’s essential. If you can fix problems in the design stage, you save a lot of time, hassle, and money.”

Robert H. Todd, the event organizer and a BYU engineering professor, received abundant positive feedback from very satisfied participants. “I had students approach me and inquire about how to get in to study at BYU and if they had to be a member of the Church to study here,” said Joel C. Williams, ’03. “One student even asked me for a map of campus so he could go to the administration building and find out more about coming to study here.”

Eight months of hard work paid off for the top-ranked senior team. Bryan J. Schramm, ’03, said, “It’s great to see everything you learned in school come together. It’s a big thrill.”

Schlappi had proven to himself that people with physical disabilities can still be world-class athletes.

Of Blisters, Beaters, and BYU