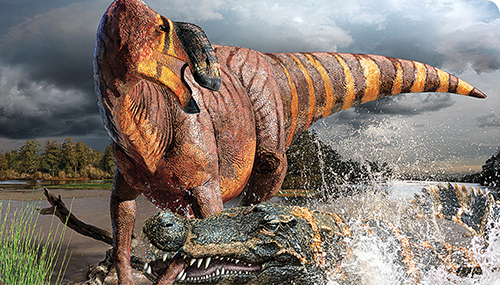 Even though Rodney D. Scheetz (BS ’92), curator of BYU’s Museum of Paleontology, has discovered a dozen dinosaurs in his day, there is still no Rodrosaur or Scheetzaurodon—yet. But his latest discovery may be one he is glad is not named for him.

That’s because Rhinorex condrupus is known for its massive, hook-shaped nose. It’s in its name: Rhinorex is Latin for “nose king.” Scheetz and his colleague Terry “Bucky” Gates of North Carolina State University detail the new species in the September 2014 Journal of Systematic Paleontology. The large schnoz, they opine, may have been used for attracting mates, identifying members of its species, or smashing plants.

This herbivorous hadrosaur, about 30 feet long and weighing over 8,500 pounds, lived in swampy areas of Utah about 75 million years ago, during the Late Cretaceous period. The discovery helps map the geography of the period and fill in gaps on the hadrosaur—or duck-billed dino—family tree.

Students from University of California, Riverside, actually discovered the fossil in 1992 near Thompson, Utah, and contacted BYU, a federal fossil repository, for assistance.

The fossil was encased in sandstone. “It was like digging a dinosaur skull out of a concrete driveway,” says Gates. It had to be broken into blocks and helicoptered out by the National Guard.

The find was first lauded for its skin impressions—which are extremely rare. Preserving the impressions took precedence as they prepped the skeleton. But as they drilled and dusted, they realized, “This thing might be interesting,” says Scheetz. Gates, a hadrosaur expert, had never seen a nose like that before.

BYU hopes to eventually display the Rhinorex in its Museum of Paleontology. In the meantime Scheetz still has “eight other dinosaurs to describe, name, and publish on.”

“It just takes so long,” he says. “It seems like everything moves in geologic time.”

”Dinosaur Jim” made a big find in 1972—the bones of a new dinosaur, the Supersaurus.

Sites and his students collaborate with scientists to trace the genetic histories of 150 species of scaly creatures.