By Stanley A. Taylor ’59 and BYU Magazine Staff in the Winter 2001 Issue 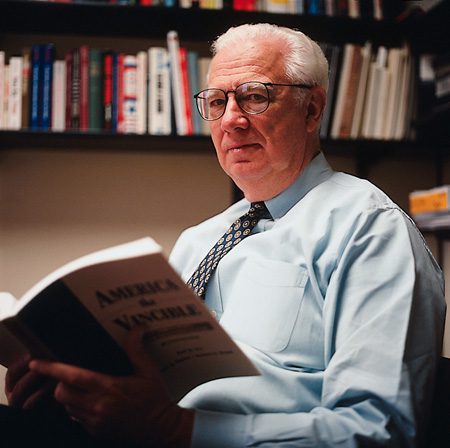 Stan Taylor “wrote the book” when it comes to national defense and the challenge of terrorism. In our current conflict he calls for patience and persistence.

BYUM: How did terrorists catch the United States government unaware on Sept. 11, 2001?Taylor: Often in the past it has not been a failure to collect information but a problem of “information overload” for those who have to analyze and make decisions about it. After the Iranian takeover of the American Embassy, people cried “intelligence failure.” I worked for a senate committee that did an investigation of what happened. We concluded that, in retrospect, all of the information needed to issue a timely warning was present in the intelligence data. But, at the time, the “message” was difficult to separate from the “noise.” That is, what was easy to see after the event was hidden in an overload of information before the event.BYUM: What can the U.S. do now to prevent terrorist attacks?Taylor: We’ve got to get better human intelligence. We may also have to develop better technical means of reviewing the surveillance that is gathered, so we can detect activities earlier. It is said that
the CIA has the equivalent of about six semitrailer loads of information dumped into it every day. So I think we need to strengthen our analytical intelligence.BYUM: What needs to change to improve intelligence activities?Taylor: The U.S. intelligence community is made up of 13 separate agencies and each one has a special jurisdiction or function. And there is no hierarchy, no one office to force cooperation. For example, the FBI can only work in the domestic arena while the CIA can only work in the international arena. But terrorists operate in both and sometimes get lost in the gaps between the two agencies. We need to find ways to close those gaps.BYUM: The book you coauthored with Earl H. Fry, ’71, and Robert S. Wood, is titled America the Vincible. How is the U.S. vulnerable?Taylor: Dramatic changes in travel and communications have linked nations, especially America, to the rest of the world in inextricable ways. Because of those linkages every nation, especially America, is more vulnerable, more vincible. To be completely invincible, we would have to be able to stand alone, with virtually no contact with the rest of the world. We cannot do that. The very freedoms which we celebrate have led to our interdependency and our vincibility.BYUM: How can Utah prepare for the 2002 Olympic Winter Games in February?Taylor: Security requires physical security on the spot and the collection and dissemination of intelligence about threats to that physical security. We are probably going to have a lot more security officers. We’re probably going to see no-fly zones. We will have closer inspection of people and their equipment and goods. I think we will have a high priority in some of the federal agencies that collect electronic surveillance.But again, is it not true that we give in to the terrorists without a fight if we stay home from the Games, or if we alter the Games in such a way to prevent terrorism that they are not the true Olympic Games? Then they’ve won. So I hope the Olympics are enormously successful because they will be a symbol that American life has not been disrupted.BYUM: How should individuals react in order to diminish the perceived successes of terrorists?Taylor: The word terror comes from the Latin terrere, which means “to tremble.” The purpose of terrorism is to make us tremble as a nation. The best thing we can do is to get back to business. That lets them know that we can absorb something like this. It’s a tragedy and lives are affected, but we’ll press on. We still stand for those great principles of freedom, agency, and individual choice that we’ve always stood for. We have to be careful that we don’t lose those in our response.

Books to Enlarge Our Souls

Stories from exemplary lives can inspire and direct us.

A team of researchers went undercover to discover how easily criminals can create seedy shell companies.