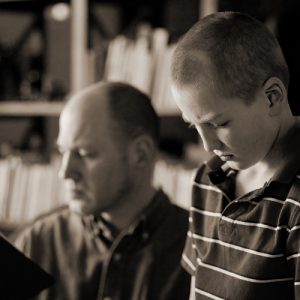 Four-year-old Kristin is having a hard time learning to share. She’s yet again taken a toy from her little brother and made him cry. Reasoning with her hasn’t worked and neither has time-out. So Mom plays the emotion card. In a voice that sounds like she’s crying, she says: “Kristin, you make Mommy so sad when you won’t share with your brother. Please give him back his toy and help Mommy stop crying.”

Drew, 10, has been nervous all evening because he knows Dad just got his report card and won’t be happy. Realizing the discussion is inevitable, Drew gathers his courage. But as he approaches, Dad doesn’t look up from his book. “I’m too disappointed in you to talk to you,” says Dad, still looking down. “Maybe next term you’ll think about that before you spend so much time on your computer games instead of your homework.”

These parents might think their efforts to influence their children are helpful. They might also have discovered that manipulation or intimidation can sometimes yield the compliance they want, at least for the short term. Researchers, however, are finding that such psychologically coercive parenting approaches can be as harmful to a child’s psyche as physical coercion, says Craig H. Hart (BS ’80), professor in the School of Family Life and associate academic vice president for faculty.

In child development literature, “psychological control” refers to discipline or attempted influence of a child that takes advantage of the child’s wish for love and approval from his or her parents. These manipulations include guilting, shaming, withdrawing love, wounding with sarcasm or condescending remarks, teasing in a way that belittles, and discounting feelings or ideas.

Drew’s father, for example, wounded his son with almost every form of psychological control. He shamed him, treated him condescendingly, and withdrew his love. “When parents do these kinds of things, they create a disconnect that makes it difficult for their child to learn from them,” says David Nelson. “Some children who are treated this way become angry and rebellious. Others develop anxiety and low self-esteem.” Shaming can be particularly harmful, he says, because it keeps a child “psychologically subservient,” communicates rejection, and casts doubt on a child’s core goodness.

Kristin’s mother wasn’t as overtly coercive as Drew’s father, but her approach was manipulative nonetheless. Rather than persist in directly teaching Kristin about sharing, her mother resorted to manipulation. “It’s not that a parent shouldn’t express emotion,” says Hart. “It’s that this mother faked her emotion and poured it on with a manipulative agenda that does nothing to teach her daughter good behavior but simply guilts her into submission.”

Perhaps the most harmful result of coercion is that children may learn to behave well only to retain their parent’s love, attention, and approval, not because they’ve internalized sound values. “As they focus on trying to comply with a parent’s psychological demands, they have a hard time learning inward control. They don’t learn how to regulate their emotions and their behavior from the inside rather than from external pressure, and that makes for a difficult adjustment to adulthood,” says Hart.

Being overprotective can be another form of psychological control. Vigilant guarding actually creates even more withdrawal and anxiety in a child, says Larry Nelson. “The child never gets to practice the skills needed to interact socially and is without the tools needed for successful social encounters.” When a child feels a parent shielding her, she may conclude Mom or Dad thinks she’s incompetent and withdraw even more.

Most parents understand that physical coercion is out of bounds, but some fail to recognize the undermining impact of psychological control. And in the Latter-day Saint culture, because the stakes of obedience to gospel principles are so high—eternal life—parents might be tempted to demote the doctrine of agency and elevate the importance of compliance. For example, parents of a teenager who argues that he wants to be with friends on a Monday night instead of at Family Home Evening might be tempted to accuse him of caring about his friends more than his family. “This is one of the most insidious aspects of psychological control—that parents often use it to achieve worthy goals, like family unity,” says David Nelson.

Perfect parenting doesn’t exist, say the researchers, and all parents probably use some psychological control from time to time. By becoming more aware of your own coercive tendencies and working to minimize them, you can help your children develop a healthier sense of self and a stronger ability to self-regulate, they say. (See “Is Your Parenting Coercive?” below.)

The researchers say the antidote to both physical and psychological control is to practice “authoritative,” gospel-centered parenting, which is a loving and supportive approach toward children balanced with reasonable limits and accountability. The ultimate goal is autonomy, and children need small, increasing amounts of it as they gradually develop the ability to make their own good choices. The professors say that parents who struggle with granting autonomy can do several things to improve.

First, as often as possible offer choices to your children rather than dictate or manipulate their actions. For example, rather than threatening your son with punishment if he doesn’t eat his vegetables, you might let him choose between three vegetables. For an older child who is clamoring to spend more time with friends and less with family, you might let her choose two out of three family events in a given week rather than insist she attend them all. As she grows closer to adulthood, the ratio might change, to one out of three events, moving toward allowing her to make her own choices for all activities.

Second, monitor your body language. If you find that you physically distance yourself when your son displeases you, try moving closer. If you realize you sometimes coldly turn your back to your children, try to keep your face toward them. If you persevere, this warmer approach will get easier over time.

Third, when you feel overwhelmed by the desire to compel your child and feel sure you can’t get compliance without shouting or belittling, stop and give yourself a time-out. “Leave the room and pray,” says Hart. “Ask for the Lord’s help in parenting your child with love and acceptance.”

The professors note that there’s no guarantee a child will become an emotionally healthy and faithful Latter-day Saint adult, though gospel-centered parenting does make that outcome more likely. “What we try to teach our children often takes a long time to sink in. For most it takes years,” says David Nelson. “We shouldn’t become discouraged when we have to repeat ourselves. We should remember that the same principle of repetition applies to us too—in our own parent-child relationship with our Heavenly Father.”4

Is Your Parenting Coercive?

• When I’m not pleased with my child, do I turn away or leave?

• Do I threaten to withdraw my love or attention?

• Do I act like a martyr, insisting that if my child really cared, he would do as I ask?

• Do I make sarcastic remarks about my child’s weaknesses or failures?

• Do I bring up past mistakes or embarrassments to get my child to comply?

• If my child doesn’t do what I ask, do I question her loyalty or love?

• Do I listen? Or do I change the subject, ignore his comments, speak for him, lecture him, or otherwise dominate the conversation?

With a little planning parents can find ways to harmonize their work and family responsibilities.

Meet the Smiths, a couple who opened their hearts and home to some 150 foster children.