A transfer student’s drive to research brought him to BYU—and to God. 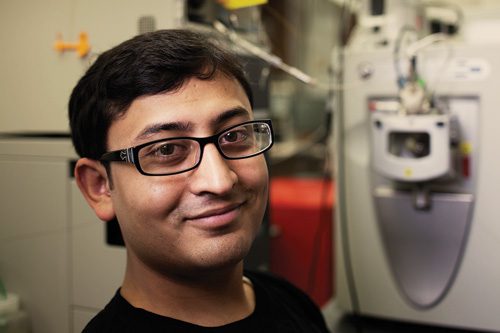 Aman Makaju (BS ’11) heard about Mormons while—of all things—watching the irreverent cartoon South Park. Curious, he requested a Book of Mormon. One of the obliging missionaries had studied at BYU, which Makaju learned had “amazing” undergraduate research opportunities.

At the time Makaju, originally from Bhaktapur, Nepal, was in his first year of college at a small university in Tennessee, where, as he puts it, “There were no research opportunities.” Craving research experience, he transferred.

His time at BYU didn’t start smoothly. Initially Makaju felt so isolated from the Church-centric social scene that he resolved to return to Tennessee. But the night he sat down to e-mail his academic advisor, someone knocked on the door: a ward missionary.

Meanwhile, Makaju—while working a graveyard BYU custodial shift—threw himself into biochemistry courses, some he wasn’t even qualified for yet. When he saw posters in the Benson Building detailing the proteomics (large-scale study of proteins) research of assistant professor John T. Prince (BS ’00), Makaju knew he wanted in. Prince put him to work immediately.

“He was a junior enrolled in senior- and graduate-level courses,” says Prince. “I could tell he was serious about it.”

A major draw for Makaju was one of Prince’s lab instruments: the LTQ Orbitrap XL, a state-of-the-art mass spectrometer. Dubbed “Mustang Sally” by Prince and company, it can identify 1,000 proteins from a cell in under three hours. Prince and his assistants are using Sally to investigate a range of biological phenomena, from asthma to how plants might survive in salty environments. Makaju has focused on pinpointing the molecular cause of migraines, a quest that may hold the key to better migraine medication.

Prince says Makaju devours existing research, recalibrates equipment, devises better protocols, and even initiates new projects. “Almost weekly,” Prince says, “he’s figured out a new way to do something.” It’s not uncommon to find Makaju asleep by the mass spectrometer—wearing a self-made T-shirt that reads, “Prince Lab: Proteomics Rocks.” “It’s clear that the research is what motivates him,” Prince says.

Makaju’s drive has also helped other labs. A grad student from professor Allen R. Buskirk’s (BS ’99) lab committed Buskirk to buy the Prince lab lunch if it could identify a protein that had eluded Buskirk’s lab. Prince remembers Makaju asserting, “We’re eating lunch!” Makaju worked away at it—and nailed it, says Prince. The Department of Chemistry and Biochemistry has also recognized Makaju’s aptitude with three $1,500 undergraduate research awards. But Makaju doesn’t think he’s extraordinary. “I found an opportunity to do what I love,” he says. “That has made all the difference.”

Doing what he loves has made a difference in other aspects of his life too; Makaju says his studies helped pave the way for his spiritual conversion. In his time at BYU, he not only joined the Church but also married fellow custodian Sabrina McCann Makaju (BA ’11) in summer 2011 in the Portland Oregon Temple.

“I wasn’t very religious when I started studying science,” says Makaju. “But when I learned more, it actually made me start believing in God. . . . The protein, life, how the cell works—it’s so complicated and it’s so controlled. . . . You realize it’s just amazing and there must be a creator somewhere.”