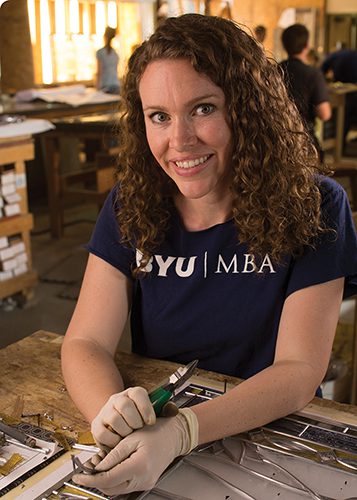 An engineer by training, MBA student Stephanie Conran sees herself as a builder—of temples, of people, and of the kingdom.
Photo by Bradley Slade

By Melissa Hart (’14)Artist, engineer, and businesswoman, an MBA student just wants to be useful for God.

In 2013 a 13-year-old boy sat in front of the Papeete Tahiti Temple, dressed in white, his limited-use recommend in hand. The temple was closed for renovation, but he wasn’t disappointed; in fact, that was the reason he came. He and his sister were waiting, hoping the temple renovators would let them help.

Stephanie L. Conran (BS ’05, MS ’05)—part of the team repairing stained-glass windows—saw the two youth and couldn’t help but let them clean windows. As the three of them worked long hours alongside the other professionals and volunteers to meet the fast-approaching deadline, they bonded over their assignments and experiences.

“All these little miracles happened to make it come together,” Conran says. “Just the fact that we finished on time was a miracle. We did not know how that was going to happen till these wonderful members started offering to help.”

Such are the experiences Conran has had since she started working with art-glass shop Holdman Studios in 2012. “She always has a smile on her face,” says Gordon DeWaal, a stained-glass manager at the studio. “When something is going wrong, she doesn’t get down.” After graduating from BYU with a master’s in civil engineering, Conran moved to California, working in water engineering by day and learning to build stained-glass windows and blow glass by night. Looking to follow in the footsteps of her great-grandfather Torleif Knaphus, who sculpted oxen and other art for several temples, Conran says, “I always felt like my ultimate goal was to build windows for a temple.” Conran quickly excelled at the trade and, in addition to her work in Tahiti, has built windows for the Gilbert Arizona and Payson Utah Temples.

After eight years as an engineer/artist, Conran decided to return to BYU for an MBA. “My civil engineering job had become really specialized, and it meant that I spent most of my time behind a desk,” she says. “I needed to be in a place where my circle of influence was always widening so that I could be building the kingdom through those connections.” Her new career target is global supply-chain management, through which she hopes to use a corporation’s influence to improve the lives of workers and families in foreign countries.

“I’m an engineer, I’m an artist, and I’m a businesswoman,” says Conran with a laugh. “I just want to be in a place where God can use me and I’m prepared to be used, wherever that is.”

Consider how BYU might be a temple of learning.

A BYU professor has found that the best way to teach children may not be through a teacher’s instruction.