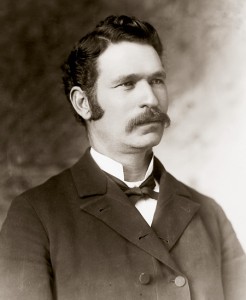 WHEN the Brigham Young Academy Building was dedicated Jan. 4, 1892, the students not only received a new facility, they got a new principal as well.At the time, beloved leader Karl G. Maeser said of himself and the new building, “The old man taught in a cabin, but they have built a palace for his boys.” The first “boy” at the helm in the new building was Benjamin Cluff Jr., the Academy’s former assistant principal and a scholar armed with substantial credentials from the University of Michigan.Cluff became an academic innovator whose contributions can still be felt at BYU, and he is the Founders Day honoree for Homecoming 2002. Many of the traditions and educational ideals that characterized Cluff’s 12-year administration remain vital today. Appropriately, one of the traditions he introduced is Founders Day itself.There was little in Benjamin Cluff Jr.’s early background, however, to suggest he would become an important educator. Born Feb. 7, 1858, to Benjamin and Mary Ella Cluff, Cluff received a casual frontier education gleaned largely from nature and the lessons taught by his mother.At about age 15, though, he developed a love for books and a passion for learning that became lifelong. When he was 19 and serving as librarian for the small town of Coalville, Utah, he learned about the fledgling Brigham Young Academy. Eager for learning, he set off on foot to make the 65-mile trek to Provo. (He found a ride after stopping overnight to visit an uncle on a ranch between Park City and Kamas.)Upon being introduced to Maeser, the country boy found himself completely tongue-tied, wrote Ernest L. Wilkinson, ’21, in Brigham Young University: The First One Hundred Years. Maeser took him by the hand, greeted him warmly, and said, “It is an honor and a pleasure to meet and welcome into our school a young man with an ambition to fit himself for service in God’s kingdom. You will be happy here.”This may have been one of the few times Cluff was speechless. He became known for his relentless push for improving education. After his first year at the academy, he was offered an instructor’s position, but he was called to serve a mission in Hawaii. When he returned, in 1882, the teaching job was again offered, and Cluff became an instructor at the academy.In 1886 Cluff left Provo for Ann Arbor, Mich., determined to stay at the University of Michigan as long as he could finance it. One of his first purchases was a coal-oil lamp to burn the midnight oil, and he spent many long nights by flickering light. Cluff stayed nearly four years and received a bachelor’s degree. He eventually earned a master’s degree by studying in absentia. At the time such degrees were relatively rare certifications.Cluff returned to Brigham Young Academy and “did not hesitate to express himself regarding the limitations” he perceived at the academy, wrote his biographers, Eugene L. Roberts and Mrs. Eldon Reed Cluff, in Benjamin Cluff Junior. He aggressively recommended new courses of study with up-to-date teaching methods and believed the school could achieve a synthesis of faith and science. Cluff was named assistant principal soon after his return.Cluff succeeded Maeser, and as the school’s leader initiated many reforms (see BYA under Benjamin Cluff ). By the time he completed his tenure Dec. 23, 1903, the school had become Brigham Young University and he was its first president.One of his former students, Bryant S. Hinckley, said of him, “Benjamin Cluff was a strong and resourceful leader who ranks among the leading educators of Utah. In his prime he was a man to be reckoned with—a good organizer, fearless, and aggressive.”

Looking Back: Turtle Trot and Dallin Oaks in a Top Hat

See the BYU Homecoming "Turtle Trot"competition of 1968 and then-university president Dallin Oaks in a top hat.

Holland at the Helm

Utah’s newest university lands an up-and-coming educator as its leader.