Holland at the Helm

Utah’s newest university lands an up-and-coming educator as its leader. 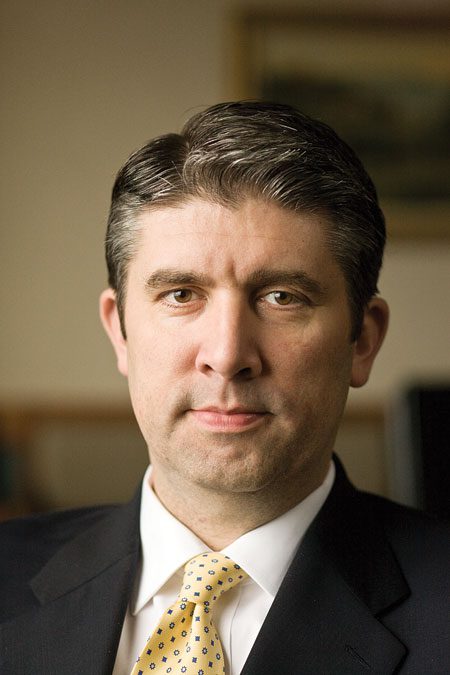 Utah Valley University president Matt Holland sees his new position as a way to practice the values he has taught as a teacher of American Heritage at BYU.

As a BYU student, Matthew S. Holland (BA ’91) could roll out of bed at 8:55 a.m. and make it to his 9 a.m. class on time. It didn’t hurt that, as a son of university president Jeffrey R. Holland (BS ’65), his bed in the president’s home was just a stone’s throw from campus classrooms. This summer Holland moves into another president’s home—this time as head of Utah Valley University (UVU).

Holland begins his work not quite a year after the state college transformed into a university. “UVU is at a pivotal point in its existence,” says Holland. “The chance to serve an institution that is going to play such a vital role in the community, a community we care about, and at such an interesting and important moment in its existence, is a fascinating and rewarding opportunity.”

This move is the next step in a growing trail of achievements for Holland. He was his college’s valedictorian at BYU, and he interned with U.S. secretary of state James Baker. Later, while earning master’s and doctoral degrees in political science from Duke University, he served as a special assistant to Utah governor Michael Leavitt. He went on to work as chief of staff for the CEO of an international management consulting firm.

When Holland returned to Provo, he taught political science—most notably the general-education course American Heritage—and did research on America’s Founding Fathers. Although Holland calls teaching political science at BYU a “dream job,” he says he saw the opportunity to be UVU president as a way to practice what he teaches. “I [spent] much of my time in American Heritage classes telling my students that it is important to be willing to serve your community, and that’s what this is about right now,” Holland says.

Holland was formally nominated for the position and went through a rigorous selection process. “We were looking for the next president of UVU to have a vision of what needed to be done at UVU, and Matt spoke very eloquently about upgrading academic standards and making UVU an authentic university,” says William Sederburg, Utah commissioner of higher education and former UVU president. “His vision fit with what I and the regents felt was a very important aspect of the position.”

Sederburg adds that Holland was also hired for personality traits—his energetic personality and humor as well as his enthusiasm about getting the community involved.

Holland aims to improve UVU’s bachelor-degree programs, add new master’s programs, and improve the quality of classes in general. And, in order to stay connected to the classroom, to the students, and to the faculty, he plans to continue teaching.

After observing his father, BYU president from 1980 to 1989 and now an Apostle, Holland says he would like to emulate his father’s “genuine care and concern for everybody, even people he disagrees with.”

Holland’s wife, Paige Bateman Holland (BA ’94), graduated from BYU, but she also had affiliation with UVU—in many of its past iterations. As a child, she took a cooking class at what was then the Utah Trade Technical Institute, and after high school she took a math course at Utah Valley State College.

“I feel like I have real roots [at UVU], because I’ve watched it evolve into what it is today,” she says. “It’s just such an exciting time to be here. You can feel the momentum and the excitement and the energy.”

The Hollands have four children, ages 11, 9, 6, and 4. And while Matt and his family are dedicated to this developing institution, he says that his commitment there does not diminish his love of BYU.

“As I go into this role, I’ll now be wearing Wolverine green instead of BYU blue, and I feel perfectly, wholeheartedly devoted to UVU,” Holland says. “But I am not abandoning the appreciation I have for BYU and what it has meant to me and my family.”

Cougar athletes are inspiring on the court and field—and at the negotiating table.

Remarkable wildflowers survive in the intense heat of Southern Utah.

BYU benefits the surrounding community in more ways than one.